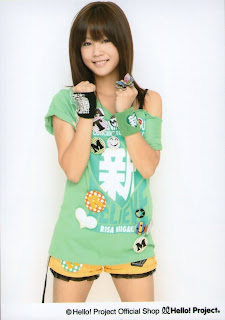 Y'all probably don't actually care about blog updates, but I thought that I would basically update today because I changed the colour scheme and banner (again) for Okay! Musume Time.

I decided a while ago that I would 'Go Green For Gaki' in April-May time, to celebrate her last month as a Morning Musume member. If you don't know why Green, it's because that is her member colour - most Gaki fans will be wearing her concert shirt, or green clothes, but as I have no green clothes (seriously, I don't) or her concert shirt, I decided to make a new banner and change the colours of this blog. I also thought about temporarily re-naming Okay! Musume Time to Okay! Niigaki Time, but dropped that idea xD

I actually had another banner that I made in case I didn't want this one, but in the end, this one was the winner because I preferred how cool and edgy it was xD I love Gaki's middle picture (so does my sister) because she looks Bad ass!

The other banner, it was rejected D;

Anyway, I love the new colour scheme! Green is actually one of my favourite colours because of how refreshing it is, so I hope that the green calms you down and makes you feel happy and content!

I also have a few posts that I need to write as well, all of them single reviews of singles that I have purchased recently, so if you like lots of writing and song-by-song reviews, then those will be appearing soon!