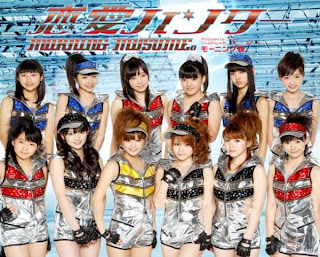 Morning Musume's 49th single, and Niigaki Risa's last, is the long awaited 'cool' single that fans anticipated after the rather unpopular (despite everyone bitching for fun, childish song to begin with) and unfairly mis-treated Pyoko Pyoko Ultra. This is also the second single featuring the 10th generation, and really shows off the more mature and cool side to Morning Musume that everyone seems to be really liking right now.

Being Gaki's last single, I really anticipated this release - especially as she would be covering a really great song for her solo in this single. The anticipation was worth it, of course, because this a great single, one of MoMusu's best in a long time (since Nanchatte Renai, in my honest opinion), though the track listing is rather predictable, too. But that is just what I think, personally.

Anyway, after having a good listen to this single, it is time to give my review, and to see how great this single really is!


The leading track of this single, Ren'ai Hunter, is a cool and mature tune, taking a total 180 from the previous single that showed off the more playful side of Morning Musume. Here, we get a song that brings out the maturity, the seriousness, and the cooler aspect of this group. Basically, this song means business, and shows us that MoMusu are a diverse group in terms of sound, and that they can pull off the cool and mature edginess despite having a few toddlers in the group.

This is the sort of song that needs some really strong vocals in it, and having Gaki as a lead was the best choice for this single, because her vocals in Morning Musume are the strongest of them all, and here we get to hear how well she has developed in terms of singing since she debuted. She really brings power into this song and strengthens it with her beautiful voice, whilst still maintaining that calm and cool image she has created for herself with this single. By far, Gaki's vocals are the best in this single, because she truly delivers the best she can, and you can really hear that passion and her love in this song.

With the rest of the vocals, I guess it's debatable. I mean, I would have honestly preferred someone like Zukki and Haruka to have been featured more predominantly in this song, because their voices could really carry well in this song, and it would show off their strengths for songs which need deeper vocals. However, we are instead given The Winking Squirrel and The Dancing Child to treat us to their voices. Actually, I adore Riho's second solo line in this song - it's just her first solo line which doesn't fit with the coolness and maturity of this song, because she sounds rather whiny and, well, the same as she does in every other single. However, her last solo line is wonderful. She really upped her game with that line, and really put some power into the song. With Winky herself, she sounds with the more powerful lines. She really knows how to work those lines when she puts some strength into them, and sounds great, but I also find that there are times where I thought that she sounded just as whiny and bland as Riho does.

My other major issue with this song is, of course, the shitty line distribution, because seriously, it is fucking bad. However I have already done that rant, and won't do it again, but seriously, I just have an issue with how little shared lines some members get. Solo's are fine, but shared lines are a totally different thing.

Anyway, all in all, this song is strong. Good vocals from Gaki, okay vocals from Winky and The Dancing Child, and a nice solo from Sayu. This cool and mature song really showed how well Morning Musume are at getting back up on their feet just after being kicked down.


Watashi ga ite Kimi ga Iru is the coupling track to Renai Hunter that is fun, up-beat and catchy, the total opposite to the A-side track. I think that this is a cute song, one that is really good, but also one that isn't A-side potential either. It compliments Ren'ai Hunter well, and brings more of a carefree, fun outlook to the single and shows off that more playful side to Morning Musume that we know and love, whilst still not being overly childish.

The great thing about this song is that everyone gets a solo line or two in this, and it is great to hear the newer members showing off their vocal skills here. Yes, some of the newer members aren't as good as other members, but it's wonderful to be able to actually hear them and distinguish their voices from the rest. Personally, I really loved Haruka, Fukumura, Zukki and Haruna's lines - the difference between each of their voices is great, and they sounded wonderful in this song - especially Fukumura, who's voice is so soothing against such a catchy and fun instrumental. The biggest surprise, though, was how cute Masaki's voice is here. She sounds so sweet, so cute, and she really made her lines her own in this, and because of that, she stood out to me the most in this song, and I am really impressed by how much she has improved since joining. By far, she has grown the most out of all the other 10th gen members.

This is a good song. It is fun and catchy, and slightly reminds me of Yamete Yo Sindbad. All of the girls sound great, they sound like they had fun, and I love how you can hear everyone's individual voices. All in all, a really good song that compliments the title track well.


The final track, and only available on the Limited E version of this single, is the solo cover song of Matsuura Aya's Egao ni Namaida ~THANK YOU! MY DEAR FRIENDS~. I love this song. The original is wonderful, and I adore the Niigaki Risa and Okai Chisato cover versions from 2011, but when I heard that Gaki would be releasing this as her 'solo' for her last single, I wondered what Tsunku would do with it, and if Gaki would sing the song in its original form. Well, of course not - instead, we get an updated version of the song, more like a party-beat than the original, that really works with Gaki's vocals.

Thsi is a fun song - okay, not the best update to an already awesome song, but I do like it, though not everyone will. Some people are a bit on the edge with this updated, more modern version of the song, but I quite like it. I like the more poppy, up-beat instrumental, and I also like how it is still really nostalgic. This song just has Niigaki Risa written all over it - it is fun, fresh, and it is strong.

This song really works for Gaki, it just fits her perfectly. It just brings out her feelings and shows off her loving and caring outlook on Morning Musume as well as the love she has for her fans. This is her song that is saying 'Thank you for supporting me all these years, thank you for letting me be in Morning Musume.' - it really speaks for Gaki, and it just suits her as a final song before she leaves Morning Musume and chooses a new career path. It compliments her personality and her voice, and I think that Gaki made a perfect choice by covering this song rather than having a brand new song created for her, because what is better than a nostalgic song that fits her so well?


This is a strong single. Probably not the strongest, but I love it as a final single for Niigaki. I do find that the song choices are a little predictable, and would love to see everything switched up for the 50th single, but I love that Gaki was able to sing a solo song, because she has covered a really great track. I like the cool sound to Renai Hunter, the fun and quirky beat of Watashi ga ite Kimi ga Iru and the nostalgic, happy sound of Egao ni Namida ~THANK YOU! MY DEAR FRIENDS~. This single is good, one of the best from Morning Musume in a while - I just wish that they would do something different rather than the predictable Cool-Genki, or Gennki-Cool track list that they have been doing for a while now. Switch it up, Tsunku!

Anyway, what did you all think of this single? Is it a winner or a loser for you? And what do you think of Gaki's cover of an Aya Matsuura song?