It's that time again! The time where I will update you on nonsense, as well as reveal this time's poll winner, and to also introduce a new poll into the mix... IF I can think of anything, haha xD

Anyway, these past few weeks have been a little bit lax on new PV's, or PV's that interest me, and news, so I haven't really been blogging much - though that much needed double whammy that was Berryz and ManoEri's PV's being released was a very much appreciated wake-up call for March. Sadly, it's going slow - much like my life, and my homework. JOY. So yeah, sorry about that.

But yeah, nothing much else to report on... SO ONTO THE POLLS!

The poll question that recently (like, a while ago) closed asked this question 'Which Korean Group/Singer who debuted in Japan is your favourite?', and you all answered with the choices that I gave you. I apologise for not including some of your favourites! I am really new with this! Dx

Anyway, who are the winners? 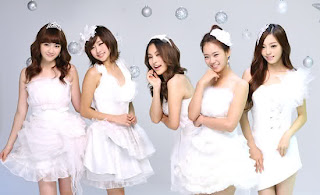 KARA!!! KARA came in first place with a majority of the votes, reeling in 21 of your votes and knocking all of the other groups to the ground! So, applause for KARA! -makes you all applaud and cheer-

Now, considering that I don't know anything about K-pop other than IU, SNSD and Kara, I would say - I'm not surprised? In all honesty, I expected both SNSD and KARA to rank pretty high, because these groups are pretty big already anyway.

Hey, why didn't I include T-ara... OMG I SHOULD HAVE INCLUDED T-ARA D8 Idiocy on my part, really - LOL. Absolute fail there, and 2AM, where are they? xD See, I know others... I just completely blank due to idiocy and tiredness. Haha.

Anyway, with that, the votes have been tallied and completed! To everyone who voted this time around, thank you! For this poll, Okay! Musume Time received 50 votes, which is amazing! I honestly really am thankful that people care enough to vote, and to tell me who they like best - it makes me wonder why, and even helps me to try and check these groups out. So, you never know - I might be checking out KARA sometime soon!

And, with that, we end another poll, but we also begin a new one!

So, what is this weeks poll? Well, it is this!

What has been your favourite PV that was released recently?

I decided on this question after the release of quite a few PV's recently, including some JE ones that I became interested in. I have also included KARA'S two new PV's as well as IU's, but I don't know if T-ara have a new one out yet, as I really don't pay much attention to the group! So, for those who don't see a PV on there that should have been listed, I apologise - but once I create the poll, and someone votes on it, the poll becomes concrete and I can not edit it at all Dx The only way to change things is to delete the poll, and start anew Dx

Anyway, please take part in this poll, and I hope that you all have fun! :D