All thoughts and opinions of this group, their songs and/or PVs are my own and no one else's, unless otherwise stated or quoted. Please respect my opinions, and do not offend me or anyone else in any way just to get your own opinions across. If you want to debate, please do, but please do so respectfully. Thank you. 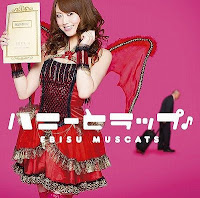 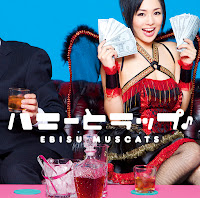 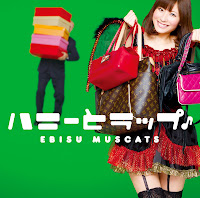 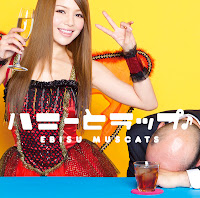 I am not unfamiliar with Ebisu Muscats, however I do not follow them as closely as I would probably like to. For those of you who don't know, Ebisu Muscats (not to be confused with Ebichu, which I often to when I am talking to my sister) are an all female group consisting of Gravure and AV idols. They are an all adult group who show off their womanly charm, and do not have a fixed line-up.

Now, whilst I don't follow any of these girls or the group itself, I do like the music that they produce - their first single is quite catchy, and the same can be said for their latest single, Honey Trap♪, which was just recently released in Japan, and ever since I first listened to the title song, I have been pretty hooked on it for its catchy beat and the cute voices of the members.

So, let's get into a track-by-track review of this single, and see how the songs fare with my tricky tastes!


The title track is a really catchy, cute song that is easily stuck in your head, and for an odd reason, reminds me slightly of SKE48's song Hanikami Lollipop. The song is upbeat and fun, with cute talking parts added in after a certain part of the song has been sung, giving a cute follow up to the lines in a more questioning tone. This song is something that is easily stuck in your head once you have heard it, and I really enjoy listening to it - I like the cute voices that we hear, as well as the rather old-fashioned type of beat I keep hearing in the background. It sounds like Idol music, but with a hint of nostalgia added to it to give the song some distinction. Because of how cute and poppy it is, especially with the cute 'Kowai Kowai, Honey Turappu', I think that this will become my favourite song from this group.

However, I do find the voices slightly annoying because of the overly cutesy voices used here - some sound forced, and it's a little bit irksome that grown women are pretending to be 'Kawaii desu~'.

Okaasan is the second track which is featured on both the Regular edition single and Limited C. This song is soft and pretty, like most slow songs, and starts off with the members of the group giving a message in soothing voices to their mothers, before singing as a chorus. The song pretty much switches between the girls talking and singing, but I like how soothing the song is throughout. It is peaceful, and gives you a sense of happiness because of how these girls sing and express their emotions throughout the entire song as they thank their mothers and express their gratitude and love. This song is very sweet, and it will make you happy as you listen to it. I think that this is a very lovely song, one that I could listen to over and over again. The girls sound beautiful, and I love how they come together like a chorus when they sing, rather than giving off a more childish vibe like they do in Honey Trap♪.

Katte no Gonzalez is the third song and is introduced on the Limited A single. The opening of the song reminds me of Koharu Kusumi's Oha single, Asaasamba, but the rest of it reminds me of, wouldn't you know it, samba music. This song has a lot of talking throughout it, and is pretty much a very long-winded instrumental without much importance to it. I don't find this track particularly appealing, as there is no singing going on throughout it, only someone instructing at certain points in the song, with the added group Samba! thrown in there to add more to the instrumental.

For e, this is probably the worst track, and the weakest. I see no point in it, and it bored me. However, I do like how it reminded me of Asaasamba in the beginning.

Go Go ... Purakawa is the last track feature don this single, and is available on the Limited B edition. If there was a song that I needed to remind of the Power Rangers or any super hero team, it would be this - the song reminds me of the days where I would watch Sailor Moon, Power Rangers and Dragon Ball Z as a child, heck, even the Powerpuff Girls. This song is quite cute and rather nostalgic, with catchy beats and rifts added to it, and catchy little lines such as Go Go Go Go Purakawa, which just add to the whole Super Sentai feel of the song. I actually wouldn't be surprised if this song was inspired by that annoying MomoClo song about Superheroes.

This song is really catchy, with some great vocals and really great effects added into the songs mix. It's an interesting listen, with a few talking parts that give a bit more of that cute Super Ranger feeling to the song. I really feel like these girls are singing about their adventures, and about saving people and I get that image of nostalgia in my mind. It makes me want to watch the Power Rangers, and I really do enjoy this song. It's catchy, fun, childish in a good way and very very cute. If you miss the days where Power Rangers was good (yet kind of tacky) or just want the nostalgic feel of a song, then give this one a try.

So, that is my take on this single - I think that all of the songs (except one of them) are all really strong and have a certain charm that will appeal to different people. Whilst I adore Honey Trap♪ for its catchy beat, I really like Go Go... Purakawa for its nostalgic feel and the whole cuteness of the song as well as how well it was made. It sounds like a song that was made for a TV show, and I adore it. If Honey Trap♪ manages to get out of my head, Purakawa might become one of my favourite songs.

Whilst I may not follow this group a lot, I do think that they are good - I would prefer that some members layed off the fake cute voices, however sometimes those voice do make the song. This single is good, and the songs are brilliant, albeit one mishap that needs to be taken off of the track listing, and the overall finish is nice. Ebisu Muscats are a good group, and I look forward to future singles from them.

And, to end this post, have you ever heard of the group? What do you make of their concept, and do you like their music?