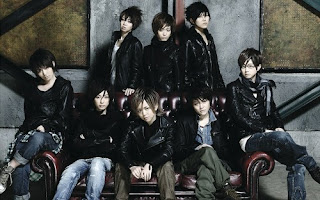 Fudanjuku is quite a unique group, as the members are all women who dress as men. Now, whilst this sort of concept may not appeal to everyone, it appeals to me, especially as of late. Sometimes, I wonder why, but other times I simply do not care - I find Fudanjuku a great group, and so I just tell myself to not question it, though sometimes I just end up doing that.

I didn't really care for Fudanjuku at first - I knew about them through my sister, who was actually really into their female counterpart group, the Nakano Fujoshi Sisters, but at that time I took no interest in either group. I was pretty much strongly rooted to H!P and nothing else at that point, and had no desire to break away from the groups I had decided to like. However, around the end of 2011, when I really started to take notice of different groups outside of the Hello! Project mold, I actually went back to a few groups - Fudanjuku was one that I accidentally found again, though I am happy that I did.

The first song that I properly listened to from Fudanjuku was actuak Katsunda!, and unsurprisingly, I was freaked out by how weird it was. This was the start of me taking notice of them, however my first impression was not a good one - after listening to this song and watching the video halfway through for the first time, I didn't want to listen to this group again. But... that song...
Somehow, it got stuck in my head and I wanted to listen to it more. I didn't know why, because honestly, it did freak me out, however, after finally giving into the weird bliss of this song, I decided to search more on this group. The concept was interesting enough, however I wasn't convinced that I would like them any more than I did then. But I was wrong.
I searched for more songs from Fudanjuku after that, and found a few, though most were previews of the PV's which really did annoy me - if I wanted to listen to this group, I wanted to see the whole PV and hear the full song, and experience the group fully. This failed, and after a day, I gave up caring about finding anything by this group other than a really weird song that had somehow gotten stuck in my head.
I did, however, manage to find the PV for their debut single, the song Otokozaka, which I really did not take to or like. It wasn't something that was to my tastes, and made me even more determined to not follow this group at all. However, I was surprised by how deep some of these girls could make their voices, and the chorus of the song was catchy - but I didn't like the PV or the song enough to like the group themselves. So, I once again failed to recognise the greatness of this group, and decided to return to fangirling over Hello! Project groups whilst still trying to get into other groups that were outside of the UFA umbrella.

It wasn't until a while later that I began to search for Fudanjuku again - In fact, it was during my time where I was writing up my Johnny's Entertainment 3 Day Challenge, or when I was trying to get into boy groups. In the comment section, someone had suggested that I check out Fudanjuku - a group where the girls dressed as guys, as a suggestion to try and ease myself into become a fangirl for boy groups. I was reminded of the group, and whilst I wasn't overly keen on trying to find out more about them, my curiosity got the better of me, and I found a video which drew me into the group.

Love Spider was the first song from Fudanjuku that I really began to enjoy - I loved the vocals and how wonderful it all seemed. It was a beautiful song by a group of great vocalists. It was amazing to hear such low voices, and to know that this group was made up of girls and not boys, but still, I wasn't entranced by Fudanjuku, I had not fallen in love...
That was until Fudanjuku had released their 7th single, titled Kaze Ikki. This was posted up on Tokyohive when it came out, and a little curious, I decided to have a listen to the song to see how it fared, and it was then, the moment that I had clicked that play button, I began to taste the love I had for Fudanjuku. It was that moment that I fell into a whirlpool of absolute amazement. I was caught up in a web by the group, finally, and I started to like them more and more, and then I began to fangirl over them.
Kaze Ikki started it all for me - the catchy beat, the way the girls moved and how they looked really caught me - I was amazed by how entertaining this group was, and how they made the PV theirs and no one else's. They looked like a group, and they really made use of their surroundings, despite how little they seemed to be working with. There was no story line, no effects, just them and a cold background where they danced and walked around. But I was still amazed by it all.
Since then, Fudanjuku have become the group that I fangirl over the most besides Hello! Project - they are the group that I would buy singles to support if I could, because I like them so much. I think that they are amazing, and ever since listening to Kaze Ikki, I have realised that one of my favourite songs from this group is in fact the weirdly wonderful Katsunda! which I originally detested so. It was strange to realise that, however it is such a fun, cheeky song that makes me happy, and I love it.
I have since watched and listened to almost all of their A-side PV's, and have fallen for both the funny and the serious sides of Fudanjuku. I have also taken to watching clips of the group where they talk to each other, and have realised that I really like Renji as a personality. He is a funny and charming character, and I really like how he acts, especially when he converses with Vanilla Beans member, Rena.

I still need to listen to their B-sides, and listen to their albums that they have released, but I am still at a progressive stage where I am learning about the group itself, however I adore their music and how they present themselves. Whilst I am still fairly new to Fudanjuku, I have realised that I am falling in love with the group. Despite the rocky start that I had with the group beforehand, I have come to realise that I really do like this group, and that I want to continue supporting them as a fan from now on.

Fudanjuku are a great group, and right now, I am anticipating their 8th single. This is just the beginning of my love for this group...
Chiima~
Posted by Chiima at 19:00