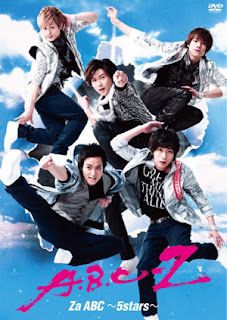 Johnny's Entertainment week continues, and this time with have a dose of a new group which recently debuted within the JE family. A.B.C.-Z debuted back in February of this year with a DVD, and whilst I initially did not want to watch the video, or even support the group, I found myself doing what I didn't want to do - and I like them a lot more now than I thought I would.

And yes - all of these reviews are on the new videos. I apologise? xD

Now, before I get into the review, remember that I said LOCK-ON is currently my favourite PV out of the JE ones I have watched recently? Yeah, scratch that out entirely - I somehow forgot about this gem and how much I adore it! Call it retardation, baslphema to JE groups or just downright forgetfulness, but I forgot about this video and how much I liked it. So, sorry KAT-TUN, but I like this PV more. Want to know why? Well, you'll need to wait it out after the Pic-spam, which is coming up next! 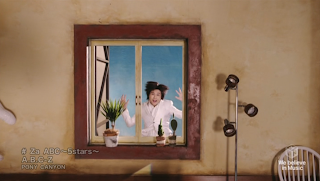 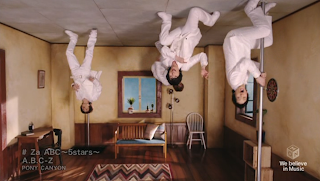 Haha, that face from the guy who's sliding down the poll! <3 Priceless xD 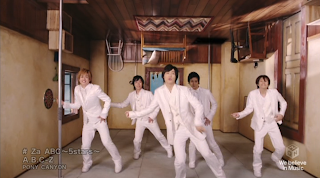 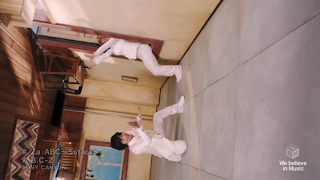 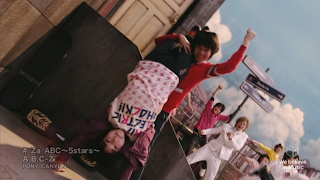 OMG, I was so happy when I saw the Juniors! They are adorable!!! 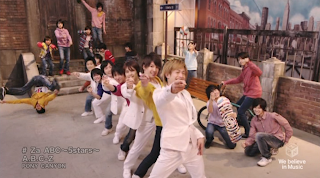 ... And a few hot ones are in the juniors, too. If they're younger than me, then dafuq...
BTW these sorts of moves are always impressive, though simple xD 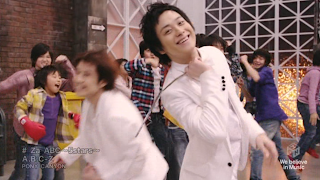 That. SMILE! <3
And that swagger, lol 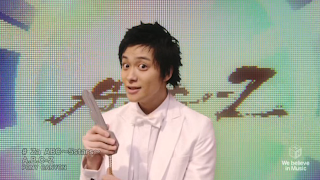 That face is a keeper. For cereal, lol. 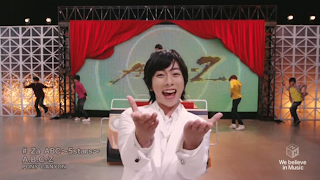 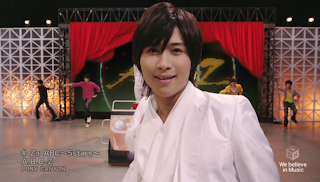 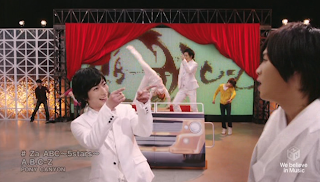 And now, much like Nino and Sho, I won't be able to tell these two apart until I memorise them properly, like all fangirls should... 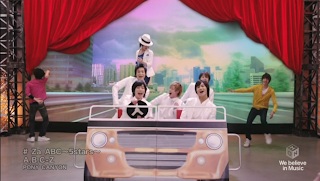 I love the screen at the back, it makes it so much more fun! And that kid is entertaining to watch 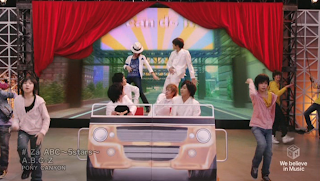 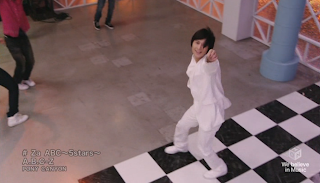 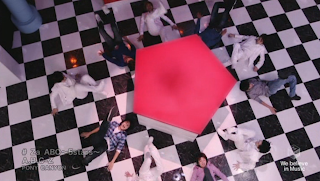 Oh this is such an epic scene, I love that the Jr's are included <3 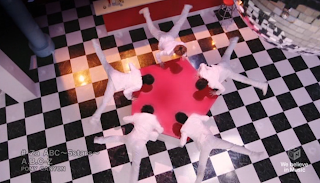 Admit it, this is snazzy xD even though we could totally do that with tables right now, lol 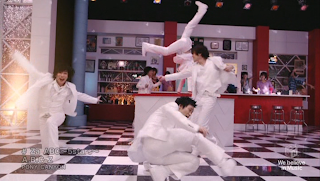 A.B.C.-Z are all excited for this debut! Look at the excitement on the guy on the left's face!!! 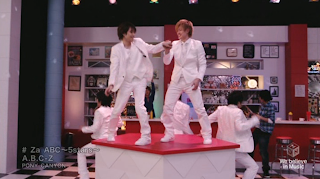 Here's some BL for all those fangirls out there xD 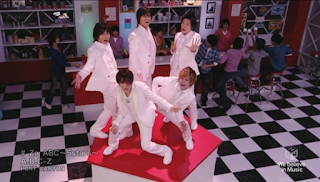 Epic group poses are much needed for a rather epic group debut, myesh? 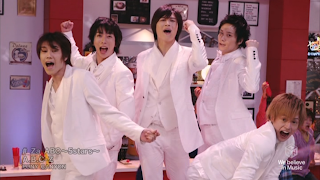 "Let's show everyone our crazy faces!"
The guy on the right, omg, his face xD So adorable, but also freaky! xD 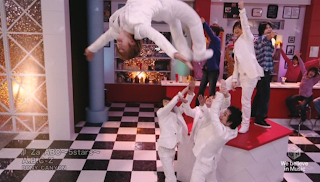 Omfg this just looks awesome... really, you should watch it to see the awesomeness...
It makes me wish I was an acrobat ;A; 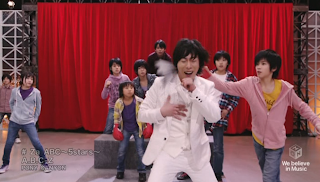 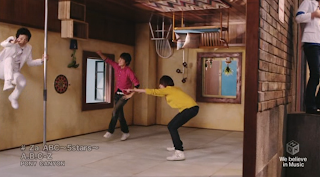 I remember when I used to do that xD 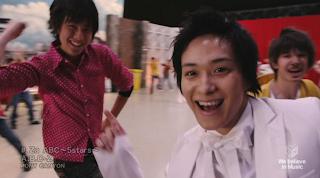 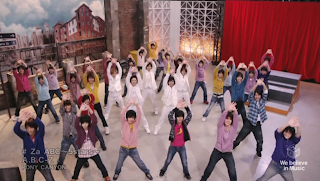 And this scene is WIN because it features the main group + the Juniors, and I think the Jr's are made of awesome. 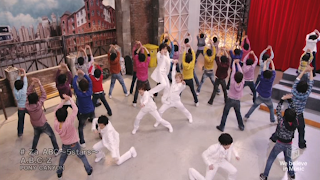 More epicness in the forms of poses put into the choreography 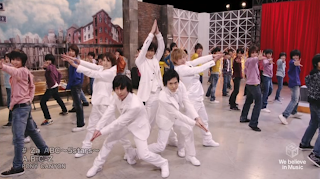 And then finish with an epic stance! Charlie's Angels style! 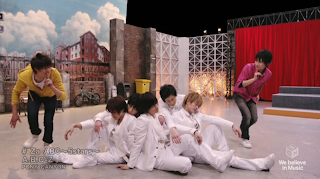 ... Then the Jr's all abandon them as they fall asleep in a boy-love kinda style 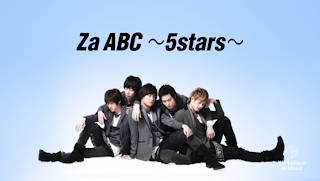 And CUT!
Okay, so that pic spam was actually shorter than normal, because I only managed to snap up 30 pictures - yes, that may seem a lot to you guys (especially my sister, xD) but I usually get around 38-45, but because of how fast-paced the video is, it was harder to get decent-ish pictures where everyone stands still and doesn't walk or back-flip away. So yeah xD Hence why this pic spam wasn't as long as normal! Whoo!
As I said at the start of this post, I really do like this PV, a lot more than the LOCK-ON's because of how fun it is. This has to be the best PV to start off the year for Johnny's Entertainment, because it's so entertaining and wonderful. I really did enjoy all of it - I loved how fast it was, I loved the choreography and how there were back-flips and cartwheels, and I loved the amount of communication the group members had with the Jr's. It was really great to watch, and it made the group itself even more enjoyable.
So, let's start with the amazing choreography - again, I love it! I love that there is gymnastics added in there, it really sets this group apart from others, and I like how in the choreography the members are interacting with the Jr members and including them in it. I know that Sexy Zone had Jr's in their video, but they didn't have this amount of interaction or fun in this PV like this group does. I mean, I like seeing the Jr's in these videos now - I think that they really help to work with the video, especially when a group from the Jr's is debuting in the entertainment industry and starting out. It's basically like JE is saying 'This is how they started, and it is what they are leaving behind - but the Jr's are always there to support them'. It's kind of like ManoEri with the Eggs as backing dancers. I dunno, I may be reading into it differently to everyone else, but I see the Jr's as a symbolic meaning in a way. And I like that they are included in the choreography, because seriously, those kids are entertaining, and they really added charm to this PV for me.
I think that, if it wasn't for the choreography, I wouldn't have been sold on this group. When I watched the first few seconds for the first time, I wondered what the hell was going on, then continued to watch it and I was simply amazed by what this group was doing. Ii mean, they are charming themselves with their smiles and how they act in front of the camera, but I loved all of the acrobatic moves that were put into the video, and yes, it's what sold me with this group. It honestly does make me want to continue to watch them, because the idea of an acrobatic group is awesome! They have something different to other groups out there, and it makes them stand out.
Now, the members themselves. I think we have already figured out who I might have a bias on, and it's that guy with the really nice smile that looks a little bit freaky. Man, I loved him in this. He just entertained me to no end. In fact, my favourite scene in this is surprisingly the scene where he holds the key in front of him and the camera pans back. Seriously, that is my favourite scene, and even I don't know why. I just like how it looks, and how he presents himself. I need his name, someone, tell me his name - please?
Actually, I think I like all of the members - but that guy seems to stick to me more specifically. But really, all of these guys are entertaining. I liked how they worked with the camera, and I loved their expressions. They all seemed to genuinely enjoy doing this video, and they seemed to work so well with the Jr's. Also, they're awesome with their gymnastic moves. These guys just kept me entertained throughout the video, and whilst the background was a bonus, I think that these five really made this PV what is. I mean... yeah, wow.
Before I get onto the song itself, let's just talk about the camera work and how much I love the Jr's. Wow I loved the camera work! I loved how trippy it was in the beginning, and then the amazing shots we get throughout the video. I really enjoyed it, and it just added to the awesomeness of the entire video. I think that the angles used and how the overall finish really made this PV great. It looks amazing, and I really enjoy it. I actually still can't get over how the camera turns upside down, it's amazing. I really enjoy watching those scenes, because I have to turn my own head to get around the feeling of it! xD
And yes, I adore the Johnny's Jr's. Seriously, I need to watch one of their concerts. I still haven't done so, but I really like how these guys are, and to be bluntly honest, there were times where the Jr's distracted me from the group itself, and I found myself lost in these kids dancing around, rather than focusing on the main members and their debut. They are all amazingly talented, and they just added charm to to the video. I just want to hug them all!!!
Okay, craziness over, let's get on with the song review.

Honestly, this song just makes me happy. I don't care how generic it is, it makes me so freaking happy! I just love singing along to it (the parts that I know, at least) and watching the video with this song. It's just this fun and up-beat song that just makes me feel energetic and a lot more happy. I think that, whilst the song itself is generic, it works well with the video itself and it just has that overall good feeling to it. That, and it's the sort of song that most people like - generic, fun and enthusiastic.

I think that all of the members of this group sound amazing - their voices suit the song, and I love the enthusiasm in their voices. Their solo's are really well done, and they sound amazing together. I really enjoy listening to them sing, and it makes me want to listen to the other song that they have out (Suna no Glass), which I still have yet to watch and listen to, to see how well they work with that song.

So yes - I like the song, despite how generic it is. It's a pop song which has energy and an epic routine. If I had listened to the song by itself, I would probably still like it, but probably not as much - however, as I know what the PV is like and how the video goes, I just imagine the video with it, but if I had heard it seperately, I might have thought differently.

In the end, I think that PV is better than the song itself. There is a wonderful routine, with great camera-work and teamwork from both the group itself and the Jr's. There is a lot of communication going on throughout the video, great scenes and great expressions which just made the video so enjoyable and fun. I love watching this video, because it's so happy and fills me with energy. It makes me want to dance and jump around, and it makes me wish that I had become a gymnast in a way. Watching these guys is enjoyable - they are amazing performers who should continue what they are doing, and I really hope that they release more material for me to watch and listen to, because I really did enjoy their debut, even though I initially thought that I would hate this group.

Seriously, they are worth checking out, so go take a look!

I apologise for the horrid quality of the video!