All thoughts and opinions on this group, the members, PV and song are my own and no one else's. If you dislike my opinion, then you don't have to read what I write. However, if you are fine with my opinion, then yay! 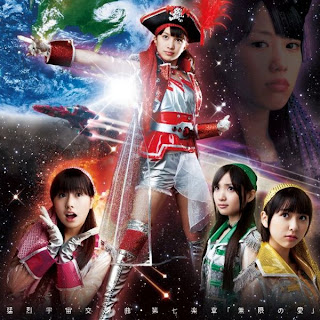 Before I write anything regarding the PV for this single, I want to say that I do not like Momoiro Clover. I find that their songs are extremely annoying, a bit pitchy and rather... loud, in the sense that one member shouts her lines rather than singing them. However, what I do admire about this group is that, unlike most other predictable Idol groups out there, MomoClo seem to pretty much think outside of the box in terms of PVs, and generally come out with something that is interesting to watch (except Roudo Sanka, that was utter shit) and, in an annoying and rather weird way, fun. Yes, MomoClo are weird - too weird for my own personal tastes, but they are rather entertaining, and that is what I do like about them.

The rest? Not so much.

So, now that that is over with, I will begin with this: My sister requested that I review this single after she watched it with me - I kind of know why she wants me to review it, and then again, I don't - one of the reasons is because of one epic WTF moment that happens in the MV that we both thought was rather surprising, and shocking too. I don't think there are any other reasons than that, but she quite likes MomoClo - more so their older songs than their newer, and I can see why in a way. Anyway, moving on, I originally wasn't going to review this PV and song - but after watching it, and after my sisters request, I feel somewhat... compelled to do so. I mean, after the disappointment of PASSPO's new song (I won't even review that piece of crap) and PV, this is like... bliss. And I never thought that I would say that about a MomoClo song or PV, but really - it's entertaining, and I like it.

... PASSPO, why the fuck did you fuck up? You made me like MomoClo for cryin' out loud!

... eurgh, anyway, let's get on with the pic spam before I digress and start to talk about how much of a disappointment PASSPO is to me right now...

And on a random, but important, side-note: The screen captions that I took are extremely bad because of the low quality video I had to work with - so if it looks like one huge lego-pixelated thing, that's why. I warned you. 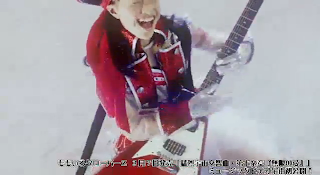 Hey look, another group that is experimenting with instruments! - Except this one actually looks like she knows how to play the damned thing instead of strumming it and pretending she knows what she's doing! 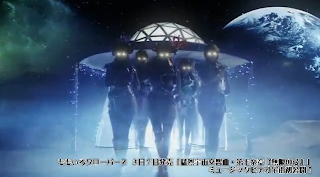 Dude, this is effin' creepy! 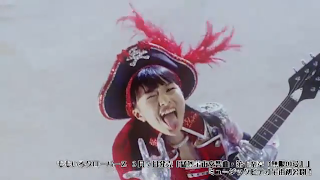 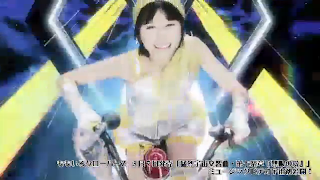 Already done by Buono!, but MomoClo do it so much better! 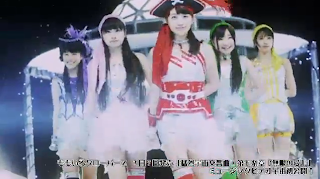 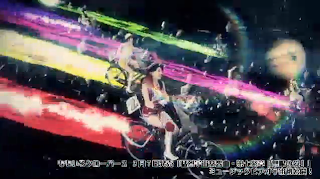 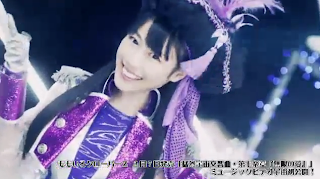 I really hate her voice, no joke :/ 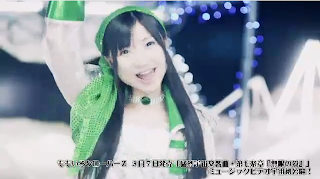 We need more of her, she's adorable and has a decent voice 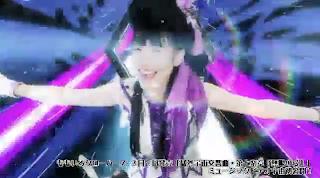 YEAH no hands!
I would like to see you no handsy-ing it into the black abyss of the universe, lol 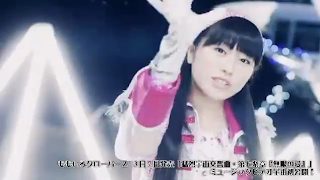 ... Why am I reminded of Star Wars or Star Trek right now? 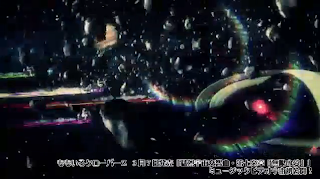 These are som seriously cool, Nyan-cat like effects right here. 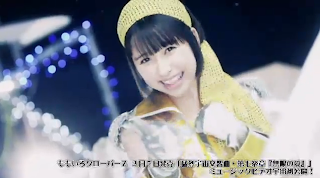 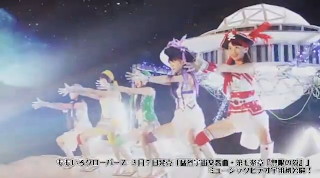 KAME-HAME-HA!
Please, you knew that reference was coming! For some reason, these are my favourite scenes - is it sadistic of me that I like to imagine they are MomoClo meteorites, or worse, on fire?
Heck, they might be going all Super Saiyan on our boots for all we know :/ 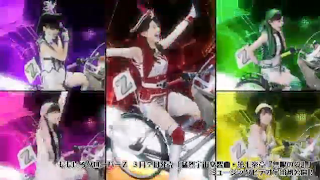 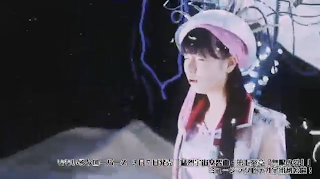 ZZZZZZZ
Looks like someone's havin' fun with tentacles... I mean, they're wired up to a machine >.> 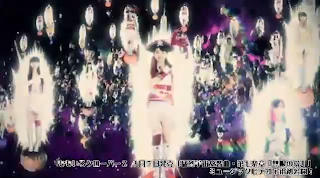 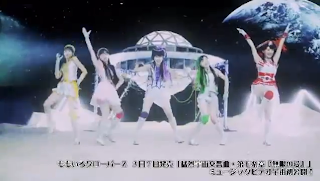 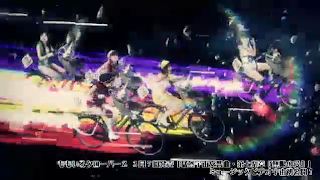 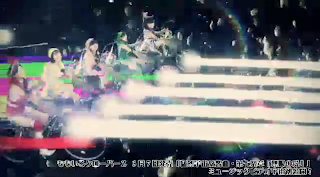 Beam those mother fuckin' headlights into the abyss! Beam them like there is no tomorrow!!! 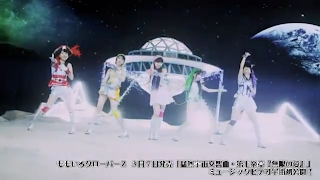 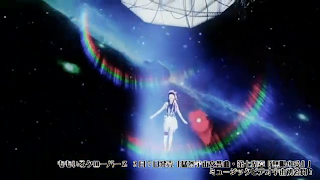 Oh, look, the one I don't like is being taken away by Aliens - Yay~ 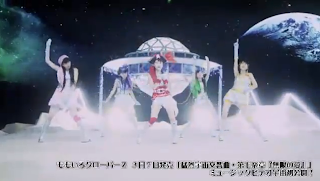 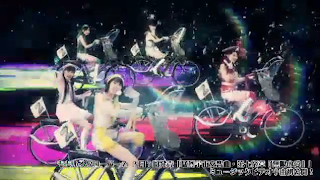 ...
Is it weird that I think of The Wizard of Oz's tornado scene during this part? Paired with Nyan cat? 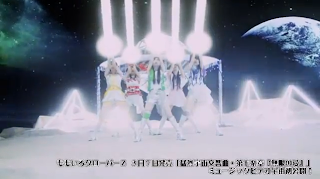 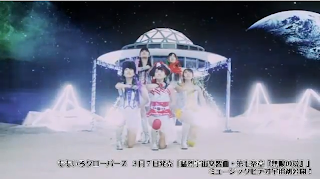 Okay, so it's pretty much that time of the review again... the review part of it all, where I can bitch and whine and praise to my heart's content! So, let's get going, shall we?

So, in all honesty I didn't want to watch this video - I had absolutely no desire to do so, because I was so intent on ignoring MomoClo for stupid reasons even unnkown to me. In the end of it all, though, a post created by Serenyty of Happy Disco got me interested in the PV - there were no screen caps or anything, just  a really convincing review that made me curious about this PV. So,  I watched it - and I was really impressed by Momoiro Clover (not gonna put the damned Z there) and their new song.

My first impression wasn't really great, honestly, because I was half focused on the PV and half focused on something else at the time, and so some of my reactions didn't appear, but I know that when that purple chick screamed after such beautiful ballad-like lines, I just gave a 'WTF' face - why did she do that? But, it was funny, and it just... adds to that weird MomoClo charm that the group has. So, it was interesting when that came up, though a little weird and kind of ruining a sweet moment. Oh, and if you're wondering, this is the reason why my sister wanted me to review the whole PV. Yeah. Oone little WTF moment xD

So, let's get on with the rest of the PV review - I honestly did enjoy this MV, and I really thought that I wouldn't. But, it's amazing. The graphics are freakin' great, top notch quality if anything, and really show off the randomness that this group has. I love the flying bicycles that shoot colour out of the back wheels like it's a spin off of Nyan Cat, and I really enjoyed the close up scenes of the girls peddling away whilst the colours zoom past them in a tunnel like fashion. And, we can't forget those meteorite-like scene where the girls are basically skimming across the sky with a jagged light encasing them - seriously, that was cool, and one of my favourite scenes in the entire video. Well, that's mostly because Greeny was shown the most in those scenes I guess. But either way, they were freakin' cool.

Now, I would like to point out that, not only do I like this PV for the fact that it is pretty cool, but because of how it ties in with the anime that the song is for - my sister actually asked me if the new song the girls were singing was for an anime she had been watching, and played the opening - I didn't know that this song was for an anime, but when I found it, I was happy that MomoClo's PV had been tied in with the cartoon - it's about freakin' space pirates. Nicely done, MomoClo!

Oh, and those costumes? Freakin' sweeeet! And there really isn't much to comment on about the dance other than the Kame-Hame-HA moves that are a nice touch.

Okies, so moving on? The song itself is really catchy and pretty cool - I was actually expecting something much more annoying and squeaky, something like that horrible Christmas song that MomoClo brought out during the Holiday season. Anyway, Ii was pleasantly surprised by this - I enjoy it quite a bit, and the song isn't overly... shouty. And by that, I mean the chick in red - she pretty much shouts her lines, and I hate that. I also hate her voice, but that's just me. But in this, I could tolerate her. As for other solo's, if you haven't guessed by now, I love Greeny's and Yellow Girls. They have the best voices IMO. If you like someone else's voice, then that is your opinion. I just seem to have a personal preference to Greeny and Yellow-y. Also, those lovely solo lines that are slow and ballad-like were so pleasing to the ears - and then that purple girls loud, screech just returned me to the land of the MomoClo. Gee, thanks. (Though it was funny! xD)

And, coming up to the group parts - I really enjoyed them. The girls sounded amazing together and not so annoying (like in that Power Ranger song). I really liked their group parts in this song, it made the experience more enjoyable for me.

Anyway, in the end of it all, Ii enjoyed nearly every aspect of this song and PV - I still don't like MomoClo any more than I did before (i.e not much), but this song is really impressive, as is the PV. It just shows how strong MomoClo is as a group and how much they are still improving. The quality of both the song and video are great, and it has that trademark MomoClo sound that is weird, annoying but overly catchy. And, as Serenyty said in her own post, MomoClo are still creating quality products despite having a sizeable fanbase - they aren't half arsing it like some groups are right now just because they can (coughAKBcough) and are still showing that they are continuing to get better and better, in videos and sound.

Really, this video is actually pretty amazing - if you haven't seen it, then please, watch it now. If someone who really does not like MomoClo recommends it, I say... try it out, because hell - I like it. And that's an achievement for me e.e

Honestly? I wish that I could have seen this in a better quality video, because the PV looks absolutely stunning - sadly, we only have something that is low quality right now, but hey, what can we do?

I recommend it, do you?