Okay, so I haven't updated in a looong time - and I don't even have a reason, really, other than that nothing interesting has been happening in the Idol world as of late, and then, when things do finally pick up, I write. So, that's pretty much why this is very very very late. Also, I have to plan for trips with the college, and find a way to earn money to go on said trips, eurgh.

So! I finally came up with a new question for the poll, one which might be of interest to some - I was actually stuck on a question (not very creative, you see) to use, and I don't want to go to the formula of 'Who is your favourite member?' So, in the end of it all,  I actually figured out how I could relate this new question to a recent post that I made! Yippee!!!
Anyway, enough of the updates, let's get onto the freakin' poll winner!!! 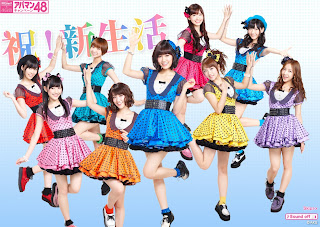 So, congrats to AKB48, who won the poll that asked just who your favourite group from the large 48' family was! AKB gathered themselves 24 votes, which claimed them the crown and brought them to victory!
So now, let's get on with the rest of the results, ne?
2nd: SKE48 (10 votes)
3rd: NMB48 (8 votes)
4th: SDN48 (5 votes)
5th: JKT48 and Nogizaka46 (3 votes each)
6th: HKT48 (1 vote)
In all honesty, I am not surprised by these results - AKB48 have obviously been around for a while now, much longer than its sister/rival groups - and HKT48 still haven't done anything worth mentioning (for fucks sake, Aki-P, give them a PV, not JKT or Nogizaka, eurgh!), so I am not really surprised that they came last in this poll. Anyway, I am happy with these results - especially as SKE48 came in second place. I really like SKE, and I prefer their songs over AKB (as well as their PVs, though they can be similar in too many freakin' ways).
Anyway, for this poll I received 37 votes - so thank you to everyone who participated and voted for their favourite team! I really appreciate the votes! I love it when I see that people have voted, it just makes me very ure Pinku desu!
And now, with that all done and dusted, let's move onto the new poll question! Ja-ja~n
Which Korean Group/Singer who debuted in Japan is your favourite?
Whilst I am actually still kind of new to the Hallyu wave (I don't follow it, honestly - I only know a handful of Korean artists who debuted in Japan), I decided that I would ask this question because of a recent post I made about IU's debut in Japan. Now, whilst I still don't know many of the groups who have actually debuted in Japan, I do know a few - so if a group you know and like isn't on there, I apologise!
Anyway, I hope that you guys will have fun polling! Again, I am sorry that it took so long to do! I should have done this sooner, but hey - laziness and little to no creativity seem to go hand in hand with me right now! Dx
Take care! Chuu~
Chiima~
Posted by Chiima at 05:57