Hey guys, it's that time again where I finally get around to tallying up the poll and figuring out the winners, getting a picture and updating you on anything! Aka, all the boring stuff! XD

Anyways, I held out a little longer with this poll in terms of keeping up, despite it being closed, because I had no idea what I would ask next. However, I know what I want to ask because the question has been bugging me for a while in terms of what I want to know, so, I will ask you the question... at the end of this post, as always!

Anywhoo, as far as updates, there isn't much to concern other than that there was some good news in my family recently, as well as the fact that I have a week off from college, which means that I can basically just do nothing until next Sunday, when I freak out because I haven't done an essay. I seem to like leaving things to the last minute, but then again, I have always been like that.

But yeah... Oh, and currently I am thinking of writing up another collab, if I can find a willing participant at all, because the last one was fun - I actually enjoy it when two people clash on certain things that they write about when it is the same topic. I actually have wanted to write up a collab with either Nia or Aim for a while now, because they are two bloggers that I seem close to in terms of how we view things and such. However, I get scared when I want to ask them Dx

Anyways, enough blabbering! Time to get on with this poll and who the winner is! So, drum roll, please... 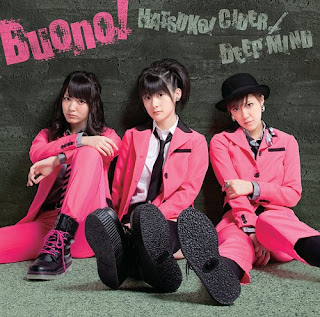 Congrats to Buono! Buono tallied the most votes, with 17, making their two PVs favourite for January! In all honesty, I agree - Hatsukoi Cider was my favourite PV of the two, but a lot of people really enjoyed DEEP MIND for the edge it had as well as its simplicity.
And now, onto the rest of the results...
2nd: Kataomoi Finally (SKE48) - 16 votes
3rd: Shining Butterfly (Dream Morning Musume) - 15 votes
4th: Pyoko Pyoko Ultra (Morning Musume) - 13 votes
5th: Chotto Matte Kudasai! (S/mileage) - 10 votes
6th: Junjou U-19 (NMB48) & Ike! Genki-kun! (Hagiwara Mai) - 6 votes
7th: Yes (Acid Black Cherry) - 4 votes
8th: Shoujo Traveller (9nine) - 3 votes
9th: Hajike Yo! (Kitahara Sayaka) - 2 votes
When I saw the results, I was more so surprised that Hagiwara Mai and NMB48 had tied more than anything, however Mai got quite a good bit of feedback from her fans regarding her PV in terms of youtube comments. I was happy to see that Kataomoi Finally came second, because the cinematography in that PV was amazing and it was one of the best PVs released from any of the 48 families last month.
Anyway, with this poll, there were a total of 42 votes! Thank you everyone who participated, it means a lot that people take notice of the poll and click on the answers that they want to win! I don't know why it means so much to me, it just does - but it makes me so happy when there is at least one person voting, so, thank you!
And now, with this over and done with, it is time to reveal the next poll question!!!
Which 48' Family Group is your Favourite?
I was thinking about this question for a bout a week, because I myself wonder which group I prefer in terms of the 48' family (including Nogizaka46) and in the end, though I choose SKE48 as my favourite, I wondered what everyone else preferred. Each group has their own individual look and feel about them in a way, but which do you prefer?
Have fun polling guys! I know that not everyone is an AKB48 fan, but I want to try and branch out with poll questions and not close them to solely H!P, because I myself am branching out with the Idol world. So yeah, have fun and I hope that your week will be fine and dandy! :D
Chiima~
Posted by Chiima at 16:00