All thoughts and opinions on this group, their songs and PVs are solely my own and no one else's. If you do not like my opinion, then you do not have to read what I write. However, if you do happen to read, please respect my opinion - I will try to keep an open-mind when writing this, but in the end, I will write how I truly think and feel towards this group. Thank you. 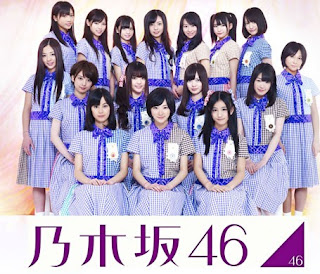 When I first heard about Nogizaka46 and the concept that this group would be a rival to AKB48, I was really excited - at the time, I was still a bit meh towards AKB, and whilst that feeling still applies today, the fact that something interesting like this had popped up was appealing to me and probably a lot of fans of the 48 ' family groups. I was really anticipating the outcome of this group and how they would rival such a popular and big group like AKB, and with a new song and original PV coming out, along with a chocolate endorsement to sell the girls and their own TV show, it seemed like they were really going to become the rivals of AKB48.

But now that they are here, they seem more like clones or another sister group rather than a rival group.

Now, I originally planned to not write my thoughts up on Nogizaka46 because their debut single bored me to death, but when I went over to Nia's blog, I saw that she herself had posted a topic on this group, and it interested me. How she pictured this group is a lot more appealing than what the group actually is, and she makes her point known - which I like. So, she kind of inspired me to create this post. So, thanks, Nia~

Now, moving back onto the topic at hand - I originally thought that Nogizaka46 would be a much cooler, darker form when opposed to AKB48, especially with their revamped and darker version of Aitakatta!, which I really do like. However, when I first watched and listened to Guru Guru Curtain, I was... disappointed. Then, after watching Aitakatta!.2, I began to realise just how much of a clone this group was rather than a rival to AKB48.

When I first watched Guru Guru Curtain, I never even finished it - heck, I still haven't because the PV is so boring and snooze-worthy. The song is fine, though quite boring and, as Nia put it, generic. But other than a cute song, Nogizaka46 really doesn't have much to offer with their debut song. Heck, it's worse than Flying Get, and I hate that song. But the real problem is that this is their debut song. Why would you give them such a crappy, horrible song if you want this group to be the rival of such an iconic and popular group? Yes, the single will sell - but that's only because of the name behind the group: Aki-P. If this were another group debuting under a different name, without AKB48 backing them up at all in terms of rivalry and creator, then the singles probably wouldn't sell well. But, Nogizaka46 has the advantage of a popular rival group, and a well-known producer. So yeah, they will sell.

Then again... isn't that all they are there for right now? To sell? Aren't they another one of Aki-P's gimmicks to get more money?

Oh well, we kinda guessed that one right away, because anything Aki-P touches right now turns into a shit load of gold, and with another cash cow to add to the list, he gets more moolah to roll around in.

Okay, getting back on topic... with the disappointment of Guru Guru Curtain, I kind of blanked Nogizaka46 out of my mind until it was revealed that the PV for their version of Aitakatta! had been uploaded. I was surprised by this, and then remembered how much I had liked this version of the song - the dark tone of it made it a lot more appealing than the original version, which I do love, and I wondered how different this would be when compared to AKB48's.


When I watched it all, completely, I began to think 'Isn't this the same as AKB48's PV for Aitakatta!', and then realised that, just like Nia had said in her blog, that this was an exact replica of AKB48's, and I kind of clicked that Nogizaka46 wasn't a rival group for AKB like Aki-P had said they would be - they were the clones or even replacements for the group.

I recently heard somewhere that Aki-P has plans to never let AKB48 get past the 10 year mark - and if that is true, then what is he left with? AKB48 are his money-makers, the girls who have made him such a big name in modern day society. Yeah, he still has SKE48, NM48, the un-used HKT48 (btw, why didn't he debut them with an original single rather than this flop of a rival group?) and now JKT48, but none of them are AKB48 - so, why not make a clone to benefit both AKB48 and Nogizaka46, but just tag them as rivals? In all honesty, it doesn't make sense to me - why call them rivals when Nogizaka46 is basically the little sister of AKB who wants to be the exact same as her older, more popular sister?

I mean, the rival idea is so freakin' cool, because the groups would be against each other, have different looks and sounds to them and appeal to different audiences, right? But what Aki-P did was slap the name tag of 'rival' onto Nogizaka46, and then moulded them into the exact same thing as what AKB48 is today.

Heck, if you want a rival group from the same agency, Aki-P, I say you should use SKE48. They are getting better songs and PVs than AKB are right now, and seem to be rivalling the group more than Nogizaka46 are. If you wanted a rival for AKB, you should have made them different in looks, presentation and how their songs and PVs are, rather than copying the style of AKB48. Seriously, I don't count an appearance of Maeda Atsuko in a PV as a war between two groups made by the same guy.

If this is the rival group for AKB48, and they stay this way, then I am seriously out. Yes, their Aitakatta! is freakin' amazing with how it sounds, but other than that, they are AKB48's copies, another little sister group to crawl after the popularity of such a popular group. Yeah, they may be rivalling AKB in advertisements with chocolate, but that's it. Everything else seems like the two groups are one and the same, but with different members and a different name. They both have the same style, and honestly, it's boring.

Aki-P, if this is your answer to a new AKB48, then please... no. Just no. This group is just boring and blaaaah.

Hell, I'm gonna go as far to say that Berryz Kobou and C-ute have a better rivalry method than these two groups right now.

They are just cash-cows. Nothing more, and if Aki-P will disband AKB after 10 years, and this group is his answer to more money, then he is an idiot if he continues to make them this boring cardboard cut-out of a good group. Aki-P, turn this group into something great, cos this rival thing is a good idea!


Nogizaka46 Guru Guru Curtain PV from The Weeaboo on Vimeo.