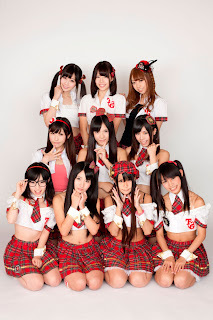 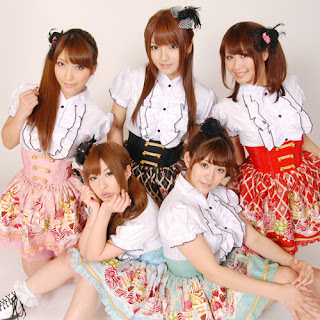 Yo! I haven't posted in a while, so I thought that I would at least update everyone a Project that I follow a lot right now on youtube, and that is Alice Project, the Underground Idol project which created the group Pureful. Whilst this project doesn't really upload that many PVs, they do upload a lot of songs from the groups and singers they have as well as upload small segments of live concerts to show the skills these girls have.

Topping☆Girls released the song Tsuke MEN☆Kyoku MEN is my favourite song of the two, with a really up-beat instrumental that sounds a bit like it has a 'tribal beat' during some parts, as well as really catchy 'Soya Soya Soya's!' during the instrumental. But the reason why I like this song is the chorus, as it is really adorable and has rapping in it. It is a rather quirky song, with small talking parts thrown in there every now and again as a few cute 'Yay's!' from the girls. I really like the vocals in this, though I think that some of the high parts don't suit certain members of the group. But that is my personal opinion.

Tsukemen ni Koishi Teru which is a fairly cute song with a very up-beat instrumental which is quick and straight to the beat. I absolutely love the vocals in this, as some solo's are quite short and change quickly to someone else, but the longer lasting solo's are really nice too. It sounds like the girls have been auto-tuned in this quite a bit, but for certain songs, it works - and it does work here.


me-me* has just released four songs, with the first being I (Ai) ♥ (Ai) Ai (Ai). This song is very cute and catchy, with the repetitive Ai Ai Ai's added in there. I won't go as far to say this would be my favourite song of the four that me-me has presented, however it is cute, if fairly annoying in its own way. It sounds like fun though, and the vocals sound really good. There are parts where I really like the song, but there are also times when I want to turn it off because of the repetitive nature. However, if you really like kid-like songs that repeat words over and over again and have a cute nature to it, then definitely give this one a listen.

Mirror, to be brutally honest, will not become one of my favourite songs from this group any time soon. It has a very cool beat that is quite mature and darker than the other songs from this unit, however it is the type of instrumental that I absolutely do not like (until the chorus, which is quite pretty). With that said, I was surprised by how vastly different this song was to the previous one. The girls all really suit this edgy, grown-up sound and it works with all their vocals nicely. The instrumental is quite interesting during the chorus, and becomes softer after the opening. It creates a nice contrast from I (Ai) ♥ (Ai) Ai (Ai), so if you like the more edgy, mature songs then you should check this one out.
You Are Addicted is the third song by me-me* and creates a more club, rave-like effect with an up-beat instrumental and pounding beats that take me back to when I listened to Happy Hardcore a lot as a 12 year old (for cereal, I am not kidding). This was the first song I listened to by these girls, and whilst I didn't excessively like it, it interested me and took me back to my early teenage days. I thought that this group would stick to this type of music, but I was surprised by how wide their music range seems to be. Anyway, enough of that, the song is really cool and grown up in its own way. I love the random male voice in the song, very rave-esque, and the girls sound amazing here like in the other two songs. The beat and the tone of the song are really cool, and I could definitely see myself moshing to this if I were to walk into a club. It has that up-beat, but then soft, nature that most club beats have and changes quite drastically before you know it. If you like club songs, check this one out - it will be worth it, and you will be addicted to the song.
Hoshi Ninaruno Datsu! is a song that returns me-me* to the cute, almost Mini-Moni like, route. It isn't as annoying as I (Ai) ♥ (Ai) Ai (Ai), but has the same cuteness to it. This is probably my favourite song from this unit right now, with the fast-paced, almost chase-like sound to it that makes it really cute and energetic. This song further shows how good these girls are when singing different styles of songs. It sounds like an anime or game theme a little, and is quite sugary-sweet - so if you like those sorts of songs, like I do, then you might just like this. The girls all sound adorable here, and they all have really nice solo's as well as group parts that fit so well together. This song makes me anticipate the future for these girls.
I like both of these groups, honestly - but me-me* is a really interesting group already, despite only just debuting. They seem to have a good vocal and music range, and are quite flexible with what they sing. Whilst it might be a while yet before they can find their style of music, I like how these girls are currently experimenting to find a sound that suits them. I like how edgy they can be, and then cute and energetic. The songs are interesting, and have kept me entertained.
With Topping☆Girls, I already liked them quite a lot. They seem to sing a lot of energetic songs, but that is what I like. I love their voices in all their songs, especially when they have an anime feel to them. I will continue to follow these girls, because both groups are honestly entertaining when they sing. They don't need PV's to rope them along - they sound amazing, and have really fun songs.
I like all of Alice Project, and the groups that they have are great. I just wish that they would bring out more PV's!
Anyways, with that said and done, do you guys know about Alice Project, and do you have any favourite groups within the project?
Chiima~