All opinions within this post are, ultimately, my own. As are your opinions. I am simply stating my opinion and what I initially feel about other peoples opinions, so there we goesy~ 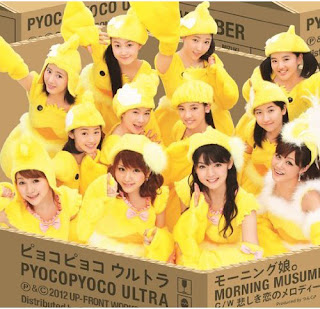 It kind of goes without saying that Pyoko Pyoko Ultra didn't receive the best response from fans the moment a preview was put up, and it seems that, whilst most people have opened up to the song and PV, a lot of other people are... well, over reacting.

Now, I don't really want to bash other people's opinions in any way possible, but some comments that people come up with are a little silly and just sound like people are complaining because they can, and not necessarily because they actually dislike the PV. In fact, most of the people who are complaining have yet to actually see the entire PV without closing it down, folding their arms and saying 'Nope, hate it. Saw 2 seconds, I hate it. End of.'

Now, I'm going to admit that when I see comments that basically call the PV horrible, I get hurt - but then again, that person is on a totally different level to me. It's their opinion, and whilst they may think 'She's crazy!' when I say I love the song and PV, I will in turn think that they are crazy for not liking it. But it's the way the world works, and we can't stop people from hating something another person loves. As the saying goes 'One man's rubbish is another man's treasure'.

I have a feeling that most of the hate for this song and video probably comes from the fact that it's new to Morning Musume, and also, because Ai-chan isn't in it. I've seen some comments on youtube stating that people were waiting for Ai-chan, but never saw her, and then they remembered that she graduated. Others just don't like the direction that Morning Musume is going in. But, as I should know - most people (new fans, I mean) joined the fandom during Emo-Musume days, much like me, and for them... it's harder to accept the sudden change from a grown-up group to a more childish and energetic group.

Now, personally, I really like the PV - and some people would agree with me. This burst of energy and happy, funky colourful-ness is something that Morning Musume hasn't seen in a long while. Whilst Maji Desu was quite happy and funky, it wasn't as over-the-top cheesey happy fun like Pyoko is. Pyoko really captures the childish, craziness that Mini-Moni once had, and what Berryz also had once. Now that most of the main groups have grown up and gone on to more mature songs, I feel that it's about time for Morning Musume to return to that cuteness they once had in their videos.

I guess the reason why people are over-reacting is simply because they don't like the change. Whilst I'm fine with it, I know that for some, it can be a lot harder to take in. I mean, Ai-chan just graduated, and suddenly this very over-the top song comes along, straight after the serious tone that Morning Musume had held for so long. Though, with the reactions this song is getting, I wonder why people don't hate Kare to Issho? That songs just as fun and over-the top as Pyoko is, and yet people praised it like hell. Oh, then again, Ai was in it.

In all honesty, I don't understand why people claim to hate it so much because of how childish it is - once, people were complaining that Morning Musume didn't bring out enough Genki songs, and now that we have it, they're just bitching about how crappy Morning Musume have become and how these songs don't suit the older members. It makes me wonder if these people have ever listened to anything other than Emo/Mature Musume.

In the end of it all, I just feel like people are bashing the song and video because they want to, and because Ai isn't there any more. But that's what I personally think. There are people who genuinely hate it, people who love it, and people who just won't give it the chance. In the end, I like the PV, and I needed to rant. So, Rant over.