All thoughts and opinions on Hagiwara Mai, her song and solo PV are my solely own. If you do not like my opinion, then that is your choice. Everyone has a different opinion, and it makes the world go round :D 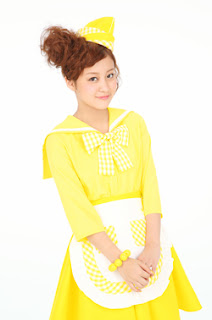 Hagiwara Mai is not my favourite C-ute member, however, I do really like her. She was the reason I got into C-ute, after all. I find the girl cute, though a little awkward, and recently she has really started to stand out in the more recent C-ute PV's. But I was surprised when I saw that she had her very own PV for her solo song, Ike! Genki-kun from C-ute's new album.
Okay, first off - Where the fuck is the gorgeous and talented Chisato's solo PV? I am all for solo PV's with the girls, especially for the more underrated members of H!P, but considering how much popularity Chisato has had recently, where is her solo PV? In fact, where's Nakky's? She quite possibly the sexiest of C-ute, and she deserves a solo PV more than anyone. Goddammit, GIVE HER A PV NOW!

Secondly; whilst I like Hagiwara Mai, I don't think that doing a solo PV was right for her. Maybe it's just me, but she looks more awkward than Ikuta Erina and Satou Masaki on their first day of PV shooting, and considering she's been in Hello! Pro for over 7 years, that's bad. 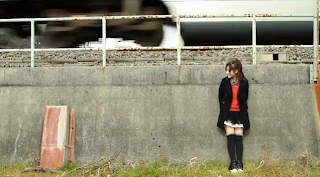 When I first watched the video, I wondered why the heck she looked so out of place and awkward - I know that she has that look on her face permanently, but here she just looked out of her comfort zone... well, at least for the first half of the video. Actually, Haggy reminded me of how socially awkward Beckii Cruel looks when she's doing a music video.
... It's bad when I compare a professional Idol to the likes of Beckii Cruel. 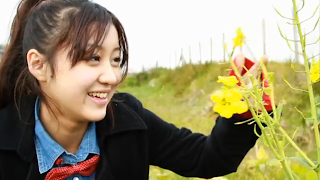 But I don't think that all the scenes are bad - there are some moments where Mai looks genuinely happy and comfortable with her surroundings - but that's when it looks like she's doing scenes meant for a photobook. In fact, sometimes I wondered if this was for a photobook. It wouldn't surprise me, with how some of the scenes are shot, such as the scene where she runs and looks quite happy. But most of the scenes where she's walking and singing she looks so bored and worried. 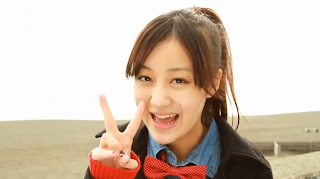 I don't know, maybe I'm being picky - but for me, I feel that Haggy is better off in a group rather than out of it. Throughout most of this video she looks like she doesn't know what to do and like she isn't sure of how to feel or even how to act. Though in the scene where she plays the guitar (like an absolute noob) she looks pretty comfortable there, which was nice to see, because worried and bored Haggy is not a fun Haggy :/ This scene was probably one of the cuter and funnier moments of the video... 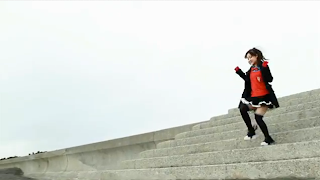 Again, there were some scenes that I liked - more so the ones where she wasn't lip-syncing to the song. Much like the scene above, I enjoyed the shots where it looked like Haggy was shooting for a photobook. But other times, the poor girl just looks so forced and out-of-it.
Sometimes I even thought 'She looks doped up'. 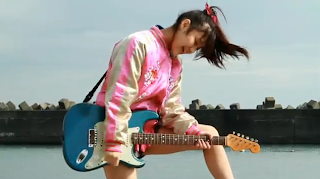 So, whilst I wasn't entirely thrilled with the video, in all its awkward glory, I really like the song. I think that the song is really cute and, though not as energetic as other songs, really up-beat and lively, something that I would listen to for a little bit of a pick-me-up when I am down. Haggy's voice isn't really the best, but this is the sort of song that fits her perfectly. She sounds good in it, and I doubt Chisato or Nakky could have pulled it off like Haggy does... Okay, maybe Nakky could... 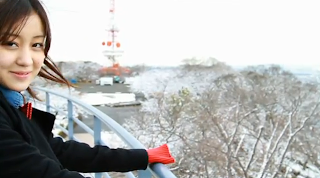 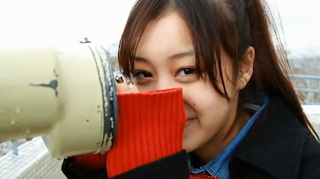 Hagiwara Mai is a cutie. She has a cute singing voice which is easy to listen to and has that sort of soothing feeling. Her voice isn't annoying (unless you listen to Hana wo Puu~n) and she has a sweet personality, but for me personally, Solo PV's are not for her. The girl has been in a group so long, and she needs that group with her rather than being a solo singer on her own. Something like this is fine for once in a while, but her awkward look and the uncomfortable presence she seems to have doesn't work for a PV or a song like this. 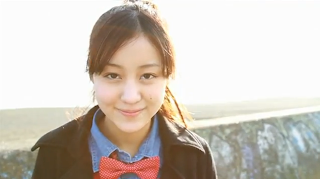 I like Haggy, and I feel that this PV will makie a lot of her fans really happy. But as a fan of hers as well, and someone who likes to look at things in a reviewers perspective, I can't help but think that Mai simply isn't cut out for being a soloist at all. She needs the rest of C-ute, and it's in the group PV's where she shines the most. Here, there is just a lack of that energy and spark she usually is. But, for her first solo PV, the video and song is a nice treat to her fans in general. But some of these shots would work so bloody well for a photobook, especially that snowy scene. Just sayin'.
And now, we need to await confirmation of a solo PV from Chisato or Nakky... Both, please.
If you still haven't watched the PV, then check it out! It might not appeal to me as much as it may appeal to you, so give it a try and see how you like it ;)
Chiima~
PING!!! International Wota Recommended Reading: January 27th, 2012
Posted by Chiima at 14:32