AKB48 and My Opinion

My opinions are all my own, as are all of your opinions. If you don't like my opinions, or just don't agree with me, then that is your choice. Freedom of thought and all that jazz.


Note: I would like to say that I am not applying any sort of label to every AKB fan, Hello! Project or Morning Musume fan. In general, most AKB fans are actually very open minded and sweet and respectful - however, some of them go too far and bitch/rant at MoMusu fans about how shitty MoMusu's music is, but when we try to slander AKB, they get butt hurt and vice versa. In no way am I bitching (if I do) to certain fans. This is just general trolls (if I mention anything about people who slander stuff).


Also, I am talking about PVs here - not PBs, I feel that PBs and PVs are two totally different things. 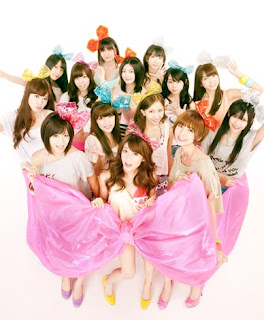 When it comes to AKB48, I sometimes feel like I shouldn't express my true thoughts on the group in case people perceive me as a hater - and it's happened, trust me. Even though I am not a hater now (I was, and I will admit it, I am not ashamed), I could still be slandered for 'hating' on a group that I may seem to not really like.

And honestly? I don't. I don't care for the group. I like their music, granted, but I do not care for this group and that is my honest opinion.

But just because I don't care for the group, it doesn't mean that I will instantly go and hate on their music. I actually like a good few of their songs, such as Sakura no Hanabiratachi (2006), Aitakatta!, Keibetsu Shiteita Aijou, BINGO!, Boku no Taiyou, Oogoe Diamond, Namida Surprise, Heavy Rotation, Everyday Kachuusha and Ue Kara Mariko, so you can't go saying that I don't go and listen to their songs - because I do. No, I haven't listened to all of their singles, but I'm still in the process of trying to listen to songs they have produced.

But, I still don't care for the group. And I guess it's because of my lack of care for them that makes people think She's a Hater. Honestly, I find it rather funny that people can think that way - just because I like one group more than another doesn't mean that I don't appreciate their music just as much as I do Morning Musume's. In fact, I recently got a comment claiming that I was basically a hater. It was anonymous, so I don't know who they are at all, but they called me out when I said that AKB were generic. I guess they thought I meant every song they did, but in all honesty - I meant their recent singles. Oh, and they told me to compare it with MM singles from 2011. Thing is, I know that MM are generic. I won't hide it. Their songs, especially Maji Desu Blah Blah, are bloody generic. Though ONLY YOU was absolute win, as were Kono Chikyuu and Kare to. I don't think that thos singles were as generic as AKB were last year, I honestly don't.

Anyway, I went off the railway track a little there.

In all honesty, I know why I don't necessarily care for AKB like I do MoMusu - I have little to no respect for them as a group right now. That doesn't mean I will always think this way, because my opinion can change, but as a girl who likes to look up to other girls, I don't see myself looking up to AKB currently. They're an Idol unit, obviously, but I find the way that they sell their merchandise/CDs is a little... well... risqué. 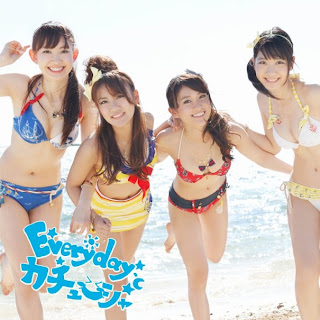 You can kind of guess where I am heading here - more so, towards Everyday Kachuusha!. I love the song, and I think that the PV has been executed so well, but, in the end, I know that this single was only for the profit and not the talent. The song is rather bland in a way, and it's overly generic, but extremely catchy. However, it's the video that sold it, and not the song - the video is pretty much made for men and not girls like me. It shows off the girls in bikini's, even stripping down to their swimwear at some parts, and for me... it's awkward. 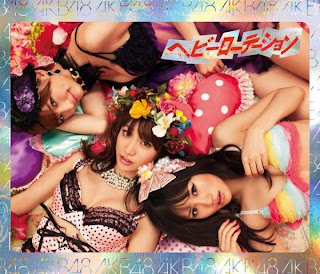 I guess the same goes for Heavy Rotation. Catchy, bloody good tune, but very generic. The PV though - it definitely sold it. I mean, the girls are in lingerie (cute lingerie), as well as showing the girls dancing around retractable poles/microphones. This PV is incredibly adult in so many ways, and I think that Heavy  Rotation (or Baby! Baby! Baby!) put a few girls off of liking the group. More so the International fans, I think.

This PV also makes me think that it was only for the profit and not the talent. The vocals are great and all, but it was more so profiting off of how the girls look and how they appeal to a certain audience, and to me, it seems downright... well, degrading. In my eyes (not yours, so don't take this to offence, please) it's just selling these girls off as sex symbols rather than Idols. However, I do, in a way, respect the girls for putting up with this sort of video - I mean, you need to be brave to strip down to your undies and to even kiss girls in front of a camera, as well as to sit in a bath with another girl whilst you're being filmed. 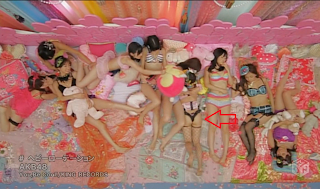 Also, I don't appreciate seeing someone's ass cheeks in a PV. It's uncomfortable for me as a girl, and also, I don't want my mother walking into my room whilst I am listening to/watching this PV.

But I actually like this song, despite the amount of awkwardness the PV gives off. Plus, those lyrics - I can easily turn a line into 'I Fuck You', which I do on occasion, because the PV and the song make it so easy to do~

Now, someone could actually bring up the argument that Morning Musume have also pranced about in their bikini's for a PV, which they have, and worn them far longer than AKB do in Everyday Kachuusha, but when I see Genki Pika Pika as a PV, I don't see sex symbols - honestly, I don't. Again, this may be because of my bias, but considering the PV was filmed in Hawaii whilst they were on one of their tours, and also the fact that it doesn't show these girls stripping down to their swimming gear, I find it more innocent.

Then again, Morning Musume's members don't have big ass boobs like most of AKB do. In Genki Pika Pika, I think that only Aika and Ai had something going on up top and the rest... flat lands.

PS This song's PV is not my favourite... probably cos of those bikini's, so yeah... 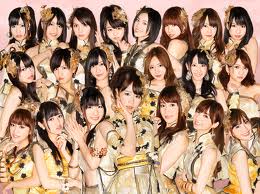 But in all honesty, I don't hate AKB48 - I just don't care for the group enough, and I don't respect them enough. I guess I have less respect for Aki P and the way he sells the girls rather than themselves - I mean, they're brave. They can wear bikini's with confidence in front of a camera. I can't even wear a bikini in my own home because of general insecurities. So, I respect them for that I guess. However, I don't like how the PVs are sold - I think a few people will disagree with me, especially the male wota, but that's my honest opinion. I would rather see the girls in something cute rather than sexy and revealing, which is why I probably respect Morning Musume more - there have been times where their clothing is revealing, but it's not revealing to the point where it looks like it's meant to just sell their sex appeal.

AKB48 are fine, but I don't like everything they do, much like a lot of casual fans towards Hello! Project or Morning Musume don't like everything that they do. I really don't like Flying Get, nor do I like Beginner or River, songs that people have recommended to me, saying how awesome they are but in the end do nothing for me. But that is my personal opinion, much like many people's opinion of Morning Musume is that they are a failing, generic, sinking ship.

I love Morning Musume, and I will defend it - much like AKB fans will defend AKB. But in the end, I just find that AKB's recent music has been all over generic (even more generic than MoMusu's, IMO) and rather sloppy, like Aki P doesn't care - however, their PVs and the execution that goes into their videos are top quality. Better than Morning Musume's? By a mile. But the songs just don't live up to the quality of their music videos, and I think that right now, it's the money that matters and not the talent, and I know that AKB have talent in singing. That is my honest, and personal opinion. 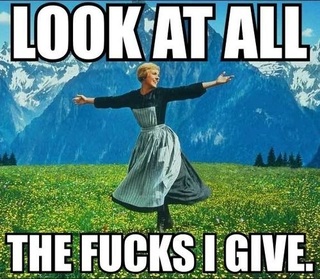 And to the AKB fans who happen to think I am hater, check the picture above. I've been waiting to use this baby since I found it~

Not a hater, but not a lover. I'm just in the middle~

Email ThisBlogThis!Share to TwitterShare to FacebookShare to Pinterest
Labels: AKB48