It's time for the 13th poll of Okay! Musume Time as well as any other updates or messages I want to give y'all~ So here they all are!!!

To everyone who has been through December with me for the many posts I have done, thank you very much! I've had a fun time writing them all out and have enjoyed the amount of PVs that have come out from my favourite groups. This December marks my first official (I don't count last year) Christmas as a blogger for my favourite Jpop groups, and I have to say, this December has been really fun!

Now all that is left is for my sister to give birth, then my year will be complete!!!

Also, on a random note, I recently created a fansite for Houkago Princess, which you can find here. I've wanted to do this for a while now, but didn't get round to it until I asked my friend Momo to help me with translations. Without her, creating the fansite wouldn't have been possible. In all honesty, it is more of a site where I will try my best to update any news for HouPri. Much like Hello! Sayunii is a news update site for Morning Musume ~^o^~

Regarding the site: If you haven't noticed, I changed the blog layout a little and made it blue - I also changed the background to a snowier landscape, as well as changed the banner to something more Christmasy. I hope you all like it! I wanted something Christmasy to get us all in the mood (right before the day xD).

Anyway, now that that's done, ONTO THE POLLS! 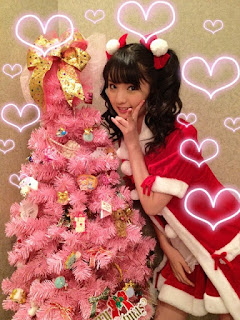 
With 28 of your generous votes, Michishige came out on top and is the Musume you would love to see in a Santa-girl outfit! And honestly? I don't blame you! She's sexy/cute, and knows how to pull off that look! I mean, her new PB is very promising in how sekushii she is...

er... ahem. So, congrats, Sayumin!!! (PS do you know how hard it is to find a picture of her in a cute Santa outfit?)

Now! Coming in second place is Eripon, the resident KY character of Morning Musume. She gained herself 15 votes, beating out her best friend, Fukupon, who came in third place with 14 votes. PonPon together, all the way! In fourth place is... Mitsui Aika! What!? You all want the boobs of the group to look sexy? I agree with the 13 who chose her ;D And then, coming after Mittsi with 12 votes is Morning Musume's current leader, Niigaki Risa! Personally, I wanted her and Eripon, but y'know... Next up is Tanaka Reina, the yankee of the group. 11 of you voted for this girl, wanting her cuteness to shine through the sant suit~ Next, with 10 votes, it's 17 year old (legal!) Iikubo Haruna, the gorgeous (imo) 10th gen newbie! YES!!! And following close behind with 9 of your votes is Ishida Ayumi, aka Predator-san, who has charmed you with her dancing skills. Go Daishi!!! Now, in 9th place, with 7 votes, is resident line-hog, Sayashi Riho. In all honesty, I don't blame you - she has nice legs, and even I can admit that without feeling like a weird perv. Then, coming along after Riho in a join 10th place is Suzuki Kanon and Sato Masaki. Okay, these two would look mega cute in Santa outfits! And then, last but not least, is Morning Musume's resident Bobble-head doll, Kudou Haruka, who gained herself 4 votes from you all. But I do understand: She's 11.

So, with that over and done with, we wrap up yet another poll! To everyone who has participated, thank you so much! This time there were 48 votes!!! This makes me deliriously happy! But that's probs cos you're all like 'SANTA-SUITS!!!!! <3' xD

It was really fun creating this poll. I am so glad I didn't choose the option where I asked who you wanted to dress as a Christmas tree (lols) because that... might have ended weirdly, right?

Anyway, once again, thank you so much for reading this blog and for taking part in the poll! It pretty much made my Christmas Eve, finding out who you guys had voted for!

Well, this week's question is: Which C-ute member would you like to personally wish you 'Happy New Year!!!'?


This was hard to think of, but as we are leaving Christmas behind, it's time to start thinking about the new years! Which also means, H!P wishlist! (or a general Idol wishlist) as well as some New Years related polls. And why C-ute? Because, I use Morning Musume too much.

Anyways, that's all for now guys. I look forward to your choices in the poll ;)