WHOO! It's that time again! The time where I put up a pretty picture of the poll winner, then ramble about a load of crap-ola~ You know the drill xD I also need to think of a new poll, which is harder than you think, because I am not as creative as I would like to be -cries-

Oh! And 2011 will be ending soon! But first, let us get Christmas over with! YEAH!!! Then we can role in the new year with some Hello! Project predictions for 2012! I will be uploading my post on my 2011 re-cap soon, most likely tomorrow, so if you like long reads, please wait until then! ;)

NOW, ONTO THE POLL! -holds sword aloft like an idiot- 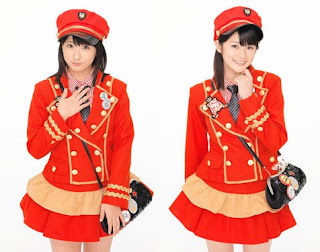 
For this poll question, everyone decided on their personal favourite S/mileage member as their postwoman! Both Yuukarin and Cinderella reborn gained 14 votes each, putting the two in a joint lead. So, congrats to the girls fro becoming your fantasy post women!

Coming in second place is the fangy, forehead master Tamura Meimi, who gained 13 votes each. One more vote, and we would have had a triple win!!! Next up is Tekeuchi Akari, who gained herself 10 votes, becoming the ideal postwoman for a few of you! Next we have Nakanishi Kana, who gained 8 votes. Whoo, some of you like some Xaviar!!! In fifth place, we have the S/mileage mini skirt leader, Dawa, who gained herself 7 happy little votes and 7 people who hope to have her running around with their mail! And fianlly, in last place, with 6 votes and my love for her cute nature, Katsuta Rina. This girl will become your personal post woman if you wish for her to be one ;)

And with that, the votes have ended! For everyone who participated, thank you so much! I really appreciate each and every vote from you guys, and I am really glad that you all decided to click your favourite girls and hope for them to win!!! For this poll, there were 28 votes! So, 28 of you guys want to see your favourite girls delivering your mail in their mini skirts? Nice~ ;)

And now, with the 12th poll all done and dusted, what will the 13th poll be about!?

Well, this weeks question is: Which Morning Musume member would you like to see in a Miss Santa suit?


This question was hard to think of, but as it is Christmas, I was wondering what sort of member would look good in one of those Santa outfits, the ones in dress form. I think some of the girls would look cute in them~ Personally, Ikuta or Iikubo would satisfy me xD But that's just me ;)

Anyway, that's it for now! Have fun polling guys~