It's that time again to go through the poll winner of the 10th Okay! Musume time Poll! Yaaay! I'm sorry for the delay this time, but I've been busy with stressing over college and such, so I didn't really have much time to update the blog at all! Gomen ne~ -puts on cute face-

So! We have hit December, and as well as hitting a new month I hit over 100 posts on this blog! WHOO! That's a big achievement for me, because I'm actually not a good blogger - I tend to post a bit and then leave the blog forever more. However, here I have hit not just over 100 posts, but I also hit over 10,000 views! That's like, really amazing! So, this year's been pretty darned good for the blog: 1st anniversary, over 100 posts, 10,000 views and the 10th Poll winner! It's the year of the 1's for sure! xD

ANYWAY, now that I have updated you with nonsense, here's a present:

LAAAWL when I saw the pageviews for that one time I just thought 'I need to put this in a post'. XD I'm so immature :P

ANYWAYS enough of that, let's get onto the Poll Winners! 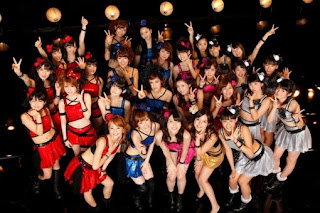 With 21 votes to their name, Hello! Project's full-unit group has taken the Okay! Musume Time crown for themselves. Everyone has voted this group for the one they listened to the most when the single came out, so well done, MoBeKiMaSu!


Coming into second place is Sexy Zone, who debuted this year with their new single Sexy Zone. Though none of them are really that sexy, they took your hearts away and gained 10 votes for themselves! In third place, we have Not Yet with their single Pera Pera Perao. I will admit, this song is one of my favourites (and a guilty pleasure), and it charmed you guys enough to give them 8 votes! WHOO! Now, in fourth place we have Acid Black Cherry, with only two votes. Oh well, at least people are listening! But it's honestly not something I would go for... and finally, in last place, but certainly not least, is AAA with their single Charge & Go!, claiming 1 vote. Awwww!

SO! Once again, thank you for participating in this poll, everyone! There was a total of 34 votes for this poll, which just goes to show that people do pay attention to the little things in blogs like polls! It makes me happy that you all took part, so thank you very much!

This week, I will be asking you this: Which Group Would You Like to See in Uniform?


This will relate to one of my previous posts on PASSPO's new single, where the girls are in flight attendant uniform. The uniform in question can be any sort of uniform, from army, to flight attendant, to school girl. Whatever tickles your fancy, really! I will be leaving a list of groups who don't really wear uniform (Morning Musume) to girls who do wear uniform a lot (Afilia Saga East, PASSPO). I want to know which group you would like to see in uniform!

For this poll, there will be 11 options! There are a mixture of girl groups and boy groups, so choose whoever you want to see in uniform at some point!

So, once again, thank you so much for taking part in this poll and for reading the blog! I really appreciate it and it makes me happy to know that people like this blog! :D