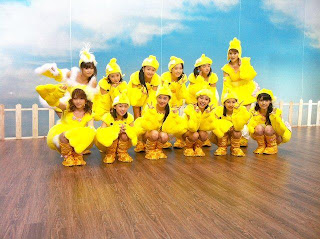 On the eighth day of Christmas, Santa-san sent to me... Pyoko Pyoko Ultra! Chick-Chick-Chick-Chicken~
One thing that I rarely do on this blog is talk about radio rips. But that's generally because Radio rips aren't full, and I would rather listen to the full song and watch the PV. However, after waiting so bloody long for a preview of ANYTHING from Morning Musume, I decided to listen to this radio rip when it popped up on my facebook news feed.


Now, if you're one of these people who generally don't listen to these radio rips and patiently wait for the full PV to come out, then I won't spoil it for you...

Though I have a feeling that Tsunku's sex noises have returned. Surprise!


The song sounds, from what I can hear, very promising, though I hear far too much Riho.

I will get over the fact that little-miss-auto tune gets lines she doesn't deserve... I may be fine with the fact that they are pushed and get lines, but it doesn't mean that I think they deserve them or sound good.


SO! Enjoy the radio rip if you listen to stuff like this!

I think that, when the full version comes out, I will be addicted to the song!

The thing that I am anticipating the most, though, is the PV. I mean, what the hell are they gonna be doing in those costumes!? Cock fights or pecking for grain!?

Oh well, we'll wait for that PV and see what it brings, but for now, let's enjoy this song preview and pray for more to come out soon!!!