WHOO! It's that time of the week again, everyone! The time where we take down the old poll, and bring in the new one! So, what do I have in store for you today?...

Me talking some nonsense, the results and the new question! That's what! 8D

So, this week quite a few releases came out; MoBeKiMaSu's Busu ni Naranai Tetsugaku, Not Yet's PeraPera Perao, Sexy Zone's Debut single, Sexy Zone and a few others that I have forgotten about. Surprisingly enough, the three songs I have listed are all songs that I absolutely freakin' LOVE!!! So if they are in my poll question (which they WILL BE) then don't be surprised ;D

Anyway, since the release Busu ni Naranai Tetsugaku placed #5 on the Oricon charts, missing out on the number 4 spot to Acid Black Cherry. Right now, Sexy Zone have overtaken the Number 1 spot whilst Not Yet, who went to Number 1 for first day sales, has gone down to Number 2.. So yeah, pretty cool. Oh, and Number 3 went to GLAY as far as I know, HOWEVER it then went to AAA. Glay is now at Number 6 on the oricon charts.

Anyway, now that I have said that, I will move on to the poll winners results now... 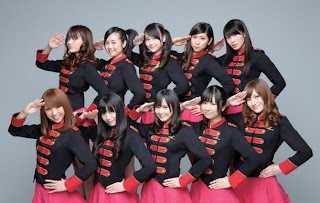 Nothing better than girls in a Uniform grabbing the Okay! Musume Time crown, is there? xD

SO! With 16 votes, Passpo won the poll for this week and won over your hearts with their cute theme and their even cuter faces. I absolutely adore these girls, and since their debut they've quite obviously claimed your hearts as well, so good work, PASSPO!

In second place, with 15 votes, Momoiro Clover Z came running just behind PASSPO in the race, but wasn't able to pass the flight attendant girl group. Next, in 3rd place, we have three groups which have an equal amount of love. With 10 votes each, Afilia Saga East, AKB48 and Tokyo Girls' Style all tied! That's pretty impressive, in my opinion. Then, next up, in 4th place, we have Bump.y with 9 votes. Oh man, you GO GIRLS! You deserved it!!! And then, in 5th place we with 8 votes is the cute and cool 9nine, who still aren't really that popular, but still a great vocal unit. Then, in 6th place we have Sea☆A with 7 votes to their name. These girls, though still on their second single, are already proving themselves to be true Japanese Idols, so YOU GO GIRLS! And then, finally in last place ranking at 7th, we have Idoling!!!, who still don't seem to be well known with the Wotasphere, however, there is still time. I personally like the group though.

Anyway, once again, thank you to everyone for all your votes!  I seriously appreciate every single one of them, and this time we have had 30 votes for this poll!!! WOOHOO! So thank you all for voting and taking time to read this blog as well! I am really thankful for that!

Now, let's figure out what the next question is for this weeks Poll!

This week, I will be asking you: What is your favourite single that came on the 16th? This will relate to the Oricon charts, with the top 5 singles ranked today. So, I look forward to your poll choices, and if you haven't seen any of the videos yet or heard the songs, then be sure to check them out, because I am pretty sure that there will be something to your tastes in there :)

Anyway, once again, thank you so MUCH for participating in my weekly poll, and thank you for reading my blog!

Email ThisBlogThis!Share to TwitterShare to FacebookShare to Pinterest
Labels: PASSPO