Happy first post of November! -sneaks in-
All opinions are, coincidentally, my own. If you do not agree with my opinion, then that is your choice. I can't help but want to speak my mind about certain things regarding the JPop world :D If you want to vent your opinions, simply create a blog too.
Okay, so before I start rambling about this new song and PV and vent out my feelings, or whatever it is I do on here, I am going to apologise for the lack of updates. I've been busy with college and have since become stressed thanks to the amount of work I have been getting. However, I really enjoy writing essays - it's page layout design and Music Video editing that I hate doing. So yeah, that is what has been stressing me lately, and it is what has been keeping me away from blogging and also, it's made me feel moody. So I haven't wanted to blog thanks to college and stress and okay I am rambling now.
MARCH FORTH, READERS! MARCH FORTH TO THE REVIEW! Watarirouka Hashiritai 7, or as I know them, Chinny & Co, charmed their way into my heart with their catchy and overly cute single Hetappi Winku, so when the news came about that they were making a new song, I was excited about it, because no matter how annoying their voices are put together, I actually like them as a group. And with the amount of love for Hetappi Winku and Valentine Kiss that I have, I was really hoping that I would love this song just as much as the two I have since mentioned.

Though quite disappointing, I have a feeling that this song will eventually (aka maybe in a year) grow on me and I will learn to appreciate it and love it as much as I do Hetappi Winku. Though I doubt I will be playing this song on a loop...

Anyway, let's get into the reminiscent PV that is Kibou Sanmyaku! 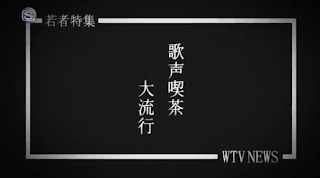 Kibou Sanmyaku!, like most AKB based groups and sub units, starts with a little act before the actual video itself starts. However, it's pretty short (thank fuck), and sounds more like a radio show rather than a TV program that is taking place back in the 1970's or 1980's. I guess it's because of the grainy microphone that is used in the beginning. However, I do like the effect, and it's a nice change from modern type PV's.
But the old-fashioned theme seems to remind me of that Not Yet's Perapera Perao time wise, and in a way, costume wise. Aki P's going old school. 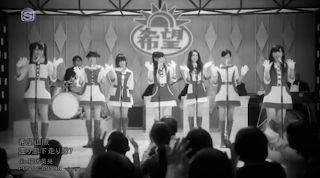 What I like about the video is how it goes from a black and white screen to full on colour, whilst still maintaining a style that reminds me of something older. Maybe it's how drained the colours look on the walls, or how the wall paper is styled. Maybe it's those shapeless, but still kind of cute costumes, that give it a retro feeling. Maybe they used a filter to wash out the colours - you never know, but even so, the feel of the video maintains a feeling of the past which is still quite quirky and cute in its own way. 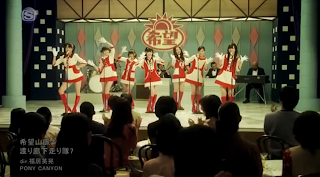 When I first watched this video, I was pretty convinced that there was no storyline to it at all - but after watching it a second time, I realised that, though it isn't really a big storyline, there is one that's quite obvious, but isn't really that exciting. The storyline portrays a popular girl group who sing in a small bar, and whilst they sing they grasp the attention of two rather depressed, sleepy or hopeless men and captivate them with their Chinny charm and their cuteness. 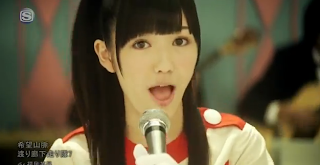 Speak of the chin, and Mayuyu shall appear!
...
Or Ishikawa Rika - whichever one you find more horrific! 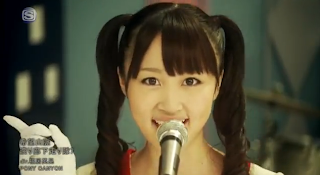 Whilst I find the video to be quite boring in all (I wanted the guy at the bar to go over and propose to the girl in the picture above or something - I wanted him to fall in WUV!!!), the girls are quite endearing throughout the entire video. Their dainty dance moves and their cute faces make the video a little more enjoyable than what I originally thought when I first watched it, however, they're not doing so well that I will totally fall in love with the video just because they smile and wink at the camera. 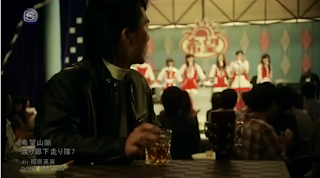 Hey look, it's the drunk dude who wants a piece of Chinny & Co! 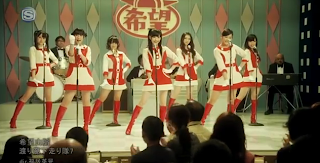 I'm gonna throw in that I absolutely adore the costume choices here - Okay, not so much the singers. In fact, it's their boots I adore more so, but the people in the crowd have some nice 70's-80's esque clothes that are really cute~ It makes me wish I lived in that period of time. (And this is when I realise... we're in the 60's era, I think!) 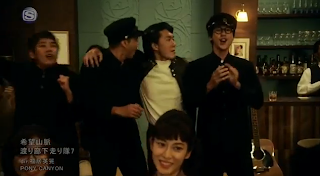 Derp face from the man on the right, courtesy of my stupidity! 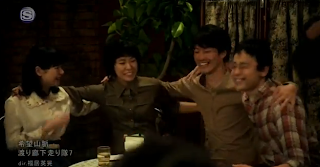 Pardoning my idiocy regarding mixing up the dates (I think - I'm still unsure, really I am), I am really enjoying the fact that the crowd is more energetic than the actual group towards the end of the video. But then I remember that they are in a bar, and there is a good chance that about 90% of these people are drunk and there to have a good time, smoke some weed and get layed. The singers are there for entertainment, but the beer is there to make the joy flow! WHOO! 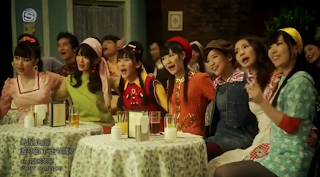 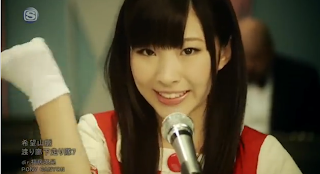 Moving on from the video, the song itself is just as appealing as the video is... or at least, that's what I thought when I listened to it for the first 10 times. My first and honest impression was that the song was horrible, it wasn't the Chinny & Co that I was used to, and it was terribly bland beyond repair. Oh, and Mayuyu's voice kept hurting my ears every time she opened that big damned mouth of hers.
Believe it or not, I like Mayuyu, she just has a horrible voice, like Momoko, Mitsui and Reina! Oh,a nd Ri-Suck-OH! 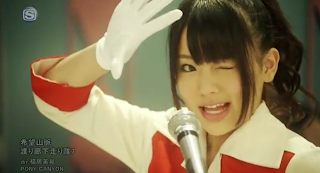 That's a winy fail...
But after listening to the song more, I have found that I have started to like it. Why? Well, it's been on a loop. Even when I vow to never like a song, I end up liking it anyway because I constantly put them on loops in order to write blog posts about the song. It happened with Tachiagaaru, sadly, and it's happened with this song too. However, I do find that when all of the girls sing together it sounds horrible piercing to my ears. Weirdly enough, I don't find their voices too bad in Hetappi Winku, but I guess because this song is slower and less pitchy than Hetappi is, their horrible, squeaky voices really stand out.
And my ears hurt. URGH. 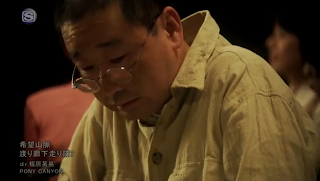 Actually, I can see this song becoming highly annoying in the near future... 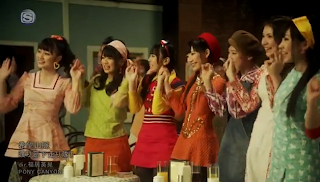 So, I am going to conclude this (rather poorly written) post now with my final thoughts on the song: 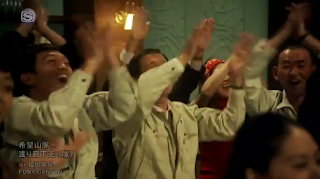 Whilst I like Watarirouka Hashiritai 7, and yes I do count the two added members because it's when I became interested in the group, I find that this song is something that... isn't up to my standards. That doesn't mean that it's not up to your standards, but for me I find that I really just don't enjoy it as much as I do when I listen to Hetappi Winku. When I listen to a song, I want it to hook and engage me straight away, like Kare to Issho or Heavy Rotation or even that annoying song Valentine Kiss. Sadly, Kibou Sanmyaku! didn't hook me straight away - it took about 20 loops in order for me to get the tune stuck in my head, and that's not good in my books. 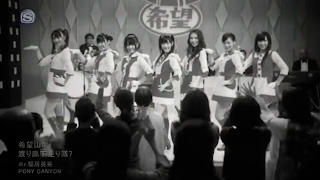 But the video itself is something that I am attracted to. From the costumes to the dainty dancing, to how the girls portray their sweet and innocent characters, I feel that the video is really well produced. Though it has a lack of a story line in there, I found it really fun to watch the people get into the song and act like drunks at a respectable tea party. I love the hue that is used to make the video seem so washed out colour wise, because it really does give the PV that vintage, old fashioned feeling that the producers were going for.

So, though the song isn't my favourite, the PV is something I really like. I think that it's a really nice way to take us out of the modern times and show us a few things of the past, like how crowded bars were, and how popular bar singers were back then. It was also fun to see the fashion from the 60's, 70's or 80's thrown in there too, as well as the black and white effect to start us off. It really throws you back into a time period that you've probably not been in before, but it's refreshing all the same, and Watarirouka Hashiritai 7 performed so well in this video.

So, that's all for now. What are your thoughts on the group and their new song?

Get the video before it disappears!


PS Just remembered that this song is for the Shin Chan movie - wow... ._. what a boring song for Shin Chan! XD