As always, all opinions are my own - if you do not like my opinions, then that is your choice. We won't always share the same opinion. Sorry~

After being a bit out of whack these past few days, and not updating with anything, I've finally sorted out my head and it's time for a review! One of my personal favourites, considering that this blog was made for reviews... Anyway, I have a group I recently discovered, and I am really liking what I am hearing! 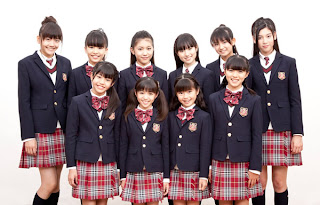 Sakura Gakuin are a 10 member unit who debuted last year, and though they are still relatively new, their name popped up on Tokyohive and Pure Idol Heart, so it kinda got me interested in the girls. Currently they only have one single and an album, but their second single will be released this year. I find that a year is a rather long time to wait for their second single, however they released their album this year too. They are also only a year old, well nearly, and still rather unknown internationally (I think). I wouldn't expect a lot of releases from a new group who don't get a lot of promotion like Fairies


Much like indie group Houkago Princess, Sakura Gakuin is based around a school theme, however they seem to project it much better and are having a little more success with it. The leader of the group is called the student council president, and whilst they all wear the same uniform, their neck ties or bow ties distinguish what sort of student they are - bow ties indicate elementary school students, whilst neck ties show that the girls are in middle school. Once a girl is old enough to be a middle school student, she will 'graduate' and earn a neck tie instead. The girls also have 'Club activities', or as we know them, sub groups.

I find this concept really cute, as well as impressive, though it makes me wonder - what happens beyond middle school? Do the girls graduate to a High school status. If so, then what about after High school? Do they have to graduate all together? You need to remember, it is based on a school theme and they seem to follow it pretty well, so I am just questioning what happens afterwards.

Anyway, questioning away, let's get into the songs. 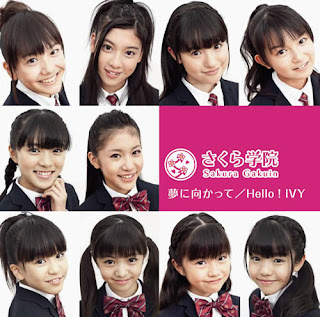 Yume ni Mukatte/Hello! Ivy is the debut single of Sakura Gakuin, featuring a double A-side plus a third song, titled School Days. All of the songs present in this single are quite catchy and up beat, with Hello! Ivy being a little bit softer than the other two songs. When I first listened to these songs, I wasn't sure what to expect, like with any other new group I am presented with, however with just this single I have been wowed by this girls - but really, it's the third song that caught me and tied me to a chair to keep me with the group, bobbing my head along happily and occasionally tapping my foot.


Yume ni Mukatte is the opening song, and is an energetic, up beat and happy song that really gets you into the group. I think that, for a debut song, this is just perfect. It emphasises the youthful joy and energy that these girls have and just really makes me feel cheerful. After hearing the news of Maeda Yuuka's graduation that is to happen, I actually turned to Sakura Gakuin for comfort music wise. I had only just found them, but it was the music I needed, and it really energised me and made me smile. It's the sort of music that I definitely do like, and the kind that makes me want to dance to it, which is why I say that it energises me. I love the nature of the song, how joyful and playful it is, and how it has been presented.


Though I haven't watched the full PV, I have seen a 2 minute preview of it as well as some of their live performances. In the performances, you can see the energy that the girls put into their performance. Though I believe that they are lip synching during one of their performances, their dance and the way they move together is energetic and bright. During another performance, performed at the Tokyo Idol Festival, none of the girls lip synch and you can see how much they love what they are doing. Their smiles and how their faces light up as they sing. You can see that these girls are giving it their all, and it really makes the song so much more energetic and it makes me like it even more than I already do.


Hello! Ivy, in a way, is a little more toned down when compared to Yume ni Mukatte, though during the beginning it is a fun and exciting upbeat tune which really gets the listener into the mood. The chorus is pretty calming, and quite repetitive too, unlike the beginning of the song, so it can be pretty misleading in its own but it is still a very happy and up beat song with a good instrumental and beautiful vocals to go with it.

Honestly, this is not my favourite song from the single - I do like to listen to it occasionally, because the girls sound so good in this, especially the one solo towards the end, however it just doesn't get stuck in my head as easily as Yume ni Mukatte or School Days. I find that the song's repetitive words can get annoying, however the girls' voices do really make up for it. The chorus, though I initially thought it would just be as up beat as the beginning, is rather calming still, but brings in an element of youthful fun and makes me rather cheerful. It may not be as up beat and fun as the other two songs it sits with, but the song does its job. If you like calmer songs, then you'll probably really like this one, but it doesn't do much for me.

Sadly, I can't find many videos with this song. It would have been nice to have seen a live performance of this song, to see how the girls looked. However, there is a 2 minute preview of the song and PV. It's rather simple, featuring the girls in group and close up shots with their cute and smiling faces, in both a natural and professional state. It's rather charming to watch, actually.


The third and final track of this single. The first time I heard it, I was like Fuck YEAH! A ballad!, because the opening is so peaceful and beautiful, and really reminded me of a school chorus - and THEN the energy kicked in and I was like Mind fuck, mind fuck, I LOVE IT! This has to be my favourite song from the single, and it is what made me go and download the album for this group. I didn't think that this group would have such a powerful impact on me with just this song, but they did.

From the misleading beginning to the very end, this song is my ideal song. It makes me really happy, and much like Yume ni Mukatte, energised and wanting to dance. In fact, I have danced to it in all my stupid glory, and I loved every second of it. I even shoot my hand into the air every time the little 'Sa's' pop up, and bob my head about giddily as I listen to this song. I have, sadly, not seen any live videos of this song, but if there are any roaming about I just really want to see what the dance is like, because I have a feeling that it is very upbeat and energetic, something I would love and something I would learn if I could.

Honestly, I don't know how the song had such an impact on me, but I love these kinds of songs - fun, energetic, makes you cheerful and happy, makes you want to dance yourself and even gets you dancing. I haven't really experienced that sort of energised feeling since listening to some Hinoi Team back when I was about 14 years old on a DDR machine. This group has really made me feel energetic, which has made me fall in love with them. This song is... my IDEAL!!!!!


There are really no videos of the girls singing this song, however someone kindly uploaded an OPV with subtitles, so YAAAAY!

So, with all of the songs reviewed, here is my conclusion of the single:


I really, really like this single - the three songs that these were given as a debut are quite possible the most perfect songs to be given to a group who are just coming out into the Idol world. The songs fit the youthful images of the girls as well as the style of the group, and though I'm disappointed that there is no ballad, the single has really impressed me. It is a wonderful introduction to this amazing group.

The girls all sound amazing together, and you can feel all of their energy and happiness through these songs. You can tell that these girls love singing, and though upon debut some of these girls had no prior experience to singing or dancing, I think this single shows the joy rather than the experience they have. These songs are genuine happy songs which make you smile and want to do silly things, like dancing as I stated before. And yes, these songs may not appeal to everyone, but they certainly appeal to me, and they will appeal to a much younger audience too.

In all honesty, I already adore this group - and it is this sound that they have, happy, energetic and distinguished, which is what I find is now lacking in current Morning Musume singles (barring that surprise attack of Kare to Issho, THAT was wonderful, kiddy bliss) and what may soon be lacking in S/mileage singles.

I honestly don't think I have loved a song this much since S/mileage's Shortcut, which is my favourite S/mileage song since it came out. This just goes to show the power of youth, uniforms and happy, energetic songs which mislead you with a ballad beginning. 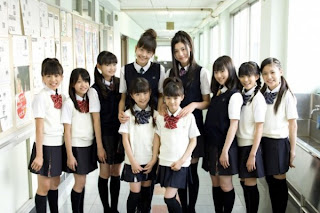 Fuck yes, I love these girls - their music is awesome!


Time to listen to some Baby Metal and Twinklestars or Sleepiece - whichever Club Activity peaks my interest tonight...

Peace OUT, have fun falling in love! The girls surpass S/mileage now, in my eyes.