Rip out your Heart and feed it to The Ebichu Zombies - Ebichu's 'Oh My Ghost?'

All opinions towards the group and this song/PV are my own. I am entitled to my opinion, and if you don't like it, then obviously... that's your view point, not mine! :) 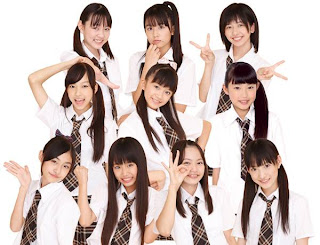 If you haven't heard of Shiritsu Ebisu Chuugaku, then quite obviously we have been living under the same rock, because I didn't hear of them until a little while ago... like, a month or two ago to be exact.
To break it down for you, Shiritsu Ebisu Chuukagu (let's call them by their shortened name, Ebichu) are Momoiro Clover Z's little sister group, but when I first heard a song of theirs I didn't know that they were any way related to MomoClo, other than the fact that I immediately realised they sounded just like MomoClo, looked like them and had the same sort of crazy, cute and over the top videos like MomoClo. I then found out that they were under the same entertainment agency, and I was like 'No Wonder'. So yeah, Ebichu are basically MomoClo, but less popular, and there's more of them to claw away at your chest and rip out your heart~
And I may get eaten alive for saying this, but all of these girls are at least 5x cuter than the members of MomoClo. That's just my opinion, kay?
Anyways, today I am reviewing the first song that I ever came across, thanks to a friend, that Ebichu had produced, and it's quite a coincidence that I decided to review it in October, the month of Halloween. Yep, it's that crazy Halloween-esque looking video Oh My Ghost? ~Watashi ga Akuryou ni Natte mo~.
Let's Dig in~ (even though it isn't dinner time XD and yes, I kinda attempted to make a pun, but it sucks ;D) 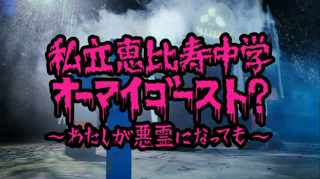 So, as I said previously, this was the first song that I listened to by Ebichu, and though I never really wanted to care for the group, I found myself coming back to the song and the video. Why? Because it's extremely bloody catchy and the girls are too cute for words. It's also nice to see the amount of effort put into the video, dance and how the girls look. It's a nice contrast from Morning Musume's simplistic PVs, even though I do love them.
But one of my immediate reactions to the video was that it seriously reminded me of Momoiro Clover, and the girls all reminded me of MomoClo too as well as their singing voices. Even the structure of the song is just like Momoiro Clover. Talking, singing-talking and a really childish, catchy beat. It all reminds me of MomoClo, but that isn't really a bad thing. 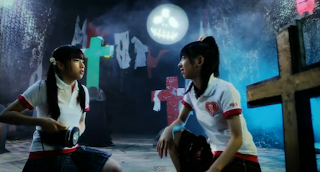 So, the video opens with some acting by two of the girls, and a strangely familiar moon in the air. Hi, Jack Skeleton! 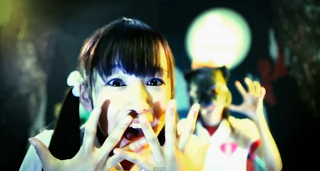 Anyway, the beginning of the video doesn't portray the best acting, but who cares? These two girls are cute, and it makes me lol a little when I listen to pigtails scream whilst looking the least bit scared. I also love the Wolf mask and the fact that Wolfy isn't ripping her friend to shreds when pigtails is just screaming to our faces. 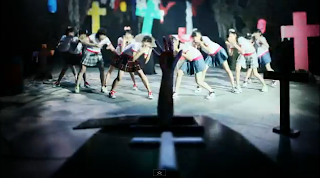 I really like the dance scenes; the dance in this video is really energetic and different to the dances I usually see Idol groups do; there's a lot of round-house kicking, and boy these girls are flexible when they lift their legs! Even though the dance isn't that complicated, it's really fun and fits with the beat so well. I love watching these girls dance, you can see that they're really into it. I also really do like the background; it isn't half-arsed, and it looks like people put effort into it *coughMajiDesuKaSkacoughhacksplutter* 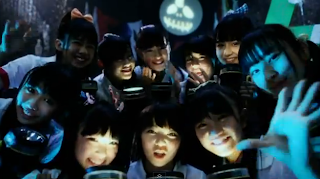 Okay, can I have one of each? 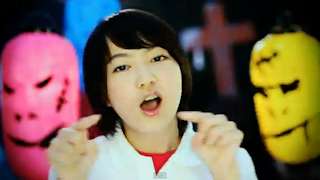 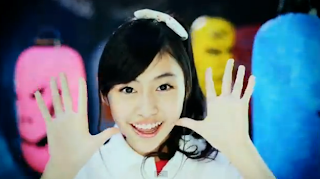 This ones my favourite <3 How could you resist that smile? 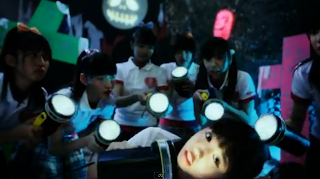 One of my favourite parts of this entire PV has to be when they come close up with their flash lights and start using deeper, huskier voices to try and give a creepy effect to the song, and it really does work. These girls make the video so cute, but also give it the amount of creepiness it needs to pull off a Halloween feeling... despite the video actually not coming out during the Halloween month XD 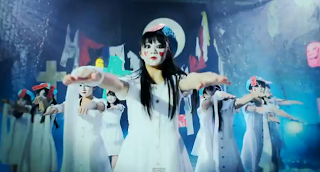 Oh lord, this scene XD My first ever reaction was 'WTF?' but I think it fits with the song - it's meant to be Halloweeny, but it isn't meant to be totally serious. I mean, what Zombie-Nurse looks like that? Luckily, it adds an element of humour in the video, but in a way it can be a bit freaky and weird if you think about it. I mean, come on! They look like mimes, and mimes can be just as scary as clowns in my opinion! I think that they brought this scene in at a perfect time during the video; it isn't too early, and the way they act when dancing during the instrumental makes the costumes and the way they look (a little gormless) fit in with the zombie-like dance. 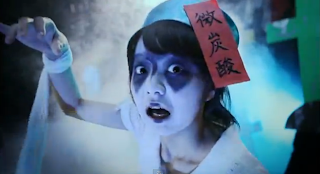 However, I do think that the make-up is a bit ridiculous, but then I remember that this is a sister group to MomoClo - there is no limit to how ridiculous the PV can be, so I forgive them for that, and applaud them for actually stepping out and playing around with the video, the costumes and the make-up. It makes it stand out and thus makes it so much more appealing. 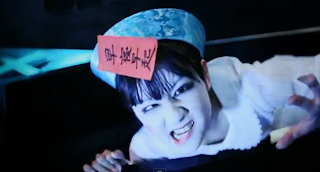 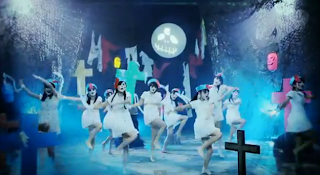 I think that girls all look really cute in those nurse dresses - maybe we could get a video with them in just those dresses without the make-up? Oh wait, I forget... they're a group based on Elementry School. Way to ruin the chances of Lolita Nurses *rolls eyes* 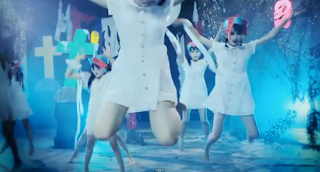 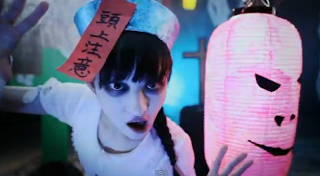 These are also some of my favourite scenes, simply because the girls either look good whilst pulling faces that are meant to be shocked or scared, or just down right cute and funny. 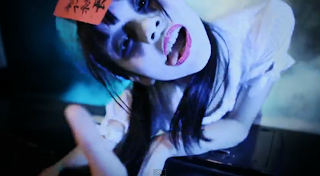 But this has to be my favourite, purely because it really fits in with the darkness, and it's something I would expect to happen from a Zombie, like 'Come to the Darkness, I has CANDEH'. 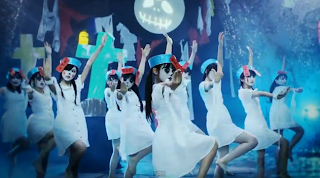 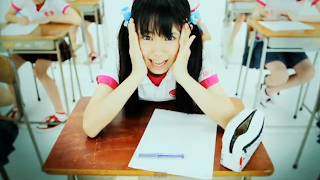 During this scene I was like 'She's too annoying, because of her adorable voice -_-;' 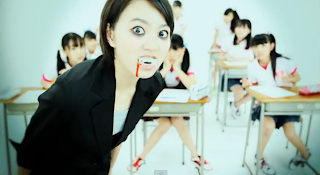 LOL at the cheapness of those fangs. Straight away you can see that there was no effort put into this one scene where the fangs were concerned, but it really doesn't bother me. It adds to the cuteness element, and seriousness is the last thing I am ever going to expect from this group! XD
Okay, so to finish this off I will talk about the song, then my overall opinion of the group:
Regarding the song, I really think that it is a fun and catchy tune. I recently seem to have it stuck in my head, and it's a song that I remember quite quickly too. When I think of the songs name, I remember the tune, and that honestly doesn't really happen for me, so yeah... this song is memorable I guess.
What I love about the song itself is that it is really fun and quirky, and changes pace so frequently throughout the song. It goes from happy and carefree to shaky and scared, with deep, lower voices thrown in as they speak/sing, then goes right back to its fast and lively pace. It's really wonderful to listen to, and makes me feel somewhat energetic. Even though you would initially think that the song would be darker and less energetic because of its theme (ghosts), it is really surprising and a great song to listen to.
Overall, for the first song that I heard from this group, I am already really impressed. I actually recently decided to see what else they had sung, and this is their last Indies single. I'm surprised that this is an Indies single, for one, because it is extremely well made and well thought out.  It's also on the same level of craziness that MomoClo is, but I guess the producers really do care for the girls and for their debut, so they made an effort. As far as I know, only one of their other indies songs has a PV, but it's a pretty simple dance-shot/close-up shot affair from what I saw of it when I flicked through the actual video.
So, I really like this group. I am surprised that they have only just debuted as a full-fledged Idol group, but I really hope that they take Japan by storm with their cuteness and the energy that they have. I would love for these girls to become well-known, popular idols like their big sister group, MomoClo, and I would love it if they kept bringing out cute and lively songs.
I really like this song and the video - initially, after first seeing it, I didn't care. I wasn't too keen on MomoClo at that point, but I've really started to like Ebichu The song kept popping up enough for me to start acknowledging it and then liking it. These girls are super adorable, and I love this song~ I also really like their newest single, Motto Hashire!, which is their debut. Please check that one out!
If you like MomoClo, then you will like this! But even if you aren't keen on MomoClo (like I'm not, really), still give this group a chance! Let them cast a spell on you with their cute charms!
Ebichu have ripped out my heart to feed their zombie selves~
Chiima~
PING!!! International Wota: Okay! Musume Time Expands Horizons, Tries Out Shiritsu Ebisu Chuugaku and Heart2Heart
Posted by Chiima at 22:25

Email ThisBlogThis!Share to TwitterShare to FacebookShare to Pinterest
Labels: Ebichu