I Can't Kiss You? Honey, I don't wanna kiss you - Beckii Cruels' 'You Can't Kiss Me' LoveRush UK remix

My opinion is my own, yaddy yada yada - REVIEW TIME! 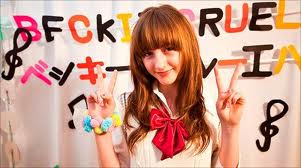 I think that most Wota's recognise the name Beckii Cruel, for the simple fact that she turned the Wotasphere upside down for all the wrong reasons.

A youtube "sensation", Rebecca Flint became a youtube hit thanks to dancing to Japanese songs, despite being rather crap at it. She spawned a good amount of views, and was asked to become an Idol in Japan thanks to her insane youtube and Nico Nico Douga popularity, as well as for being a very pretty, skinny, Idol-like girl that would appeal to the Japanese Wota. This, of course, did not last long, and soon enough Flint became nothing more than whisper in the Japanese entertainment industry, which brings us to the present day.

Now don't get me wrong - I do not dislike Beckii Cruel, in fact I like her. I just think that she's a bad dancer (who got better thanks to professional training), a terrible singer and trying to grasp something that has clearly gone out of the window and is never coming back.

I find that Beckii Cruel is just desperate now, which is sad because she's so young. She got a taste of the fame, but now it's gone, so her father is trying to get her back into that fame so that she can make a bit more money. And yes, I do think it is her father - he was the one who signed her up to become a British star, so I'm pretty sure he is still backing up his little pitchy-voiced cash cow.

Anyway, getting back on track - Do you remember that a preview was posted for Beckii Cruel's first, and hopefully only, English single? No? Don't blame you. Well, back in September I blogged about the preview that Cruel had posted on her youtube regarding this song - except it was a remixed version, and it was downright horrible to watch and to listen to.

There is ANOTHER REMIXED VERSION!!!

What the flying fucking heck!? Isn't it enough to plague us with just two versions of this song? Obviously not, because here we have a third version, and it's just as big a What the Fuck as the first two. 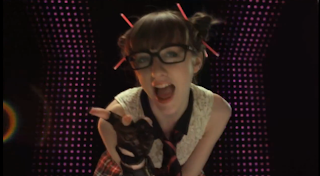 Fucking Jaysus, wtf is THAT?
Now, before I start to rip apart this horrible piece of shit, I want to first show you the description for this single, kindly written by LOVERUSH UK on the youtube channel.


"You Can't Kiss Me" is one of those tracks that will get under every ones skin, just because it's so annoyingly catchy with wacky lyrics. With the likes of Nicola Roberts delivering huge quirky pop anthems Beckii Cruel vs The Clones are definitely one act to watch for 2012. Beckii Cruel is fast becoming a youtube phenomena with over 16 million hits combined on her videos on youtube.

The only thing I can agree with are the words ANNOYING (and that the song gets under your skin, in a bad way, of course). This song is catchy, yes, but the amount of times it's being remixed and re-printed is starting to get a little annoying. One version is enough, but right now, we have three versions of this god awful song. 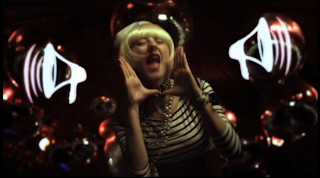 I actually don't want to listen to this song again, in fear that I will bang my head against the desk till I bleed... but listening to songs helps me review them better... so damnit, I have to listen to it!
Anyway, this version of the song is remixed rather differently - so differently that Cruel's auto-tuned voice is barely heard beneath the male vocals that are present, or the slow-mo that's been put on it. YAY! The one redeeming quality of this entire song. If you barely hear her, then you barely hear how bad her voice is. The girl is not a good singer - she proved that when she debuted as an idol in Japan. 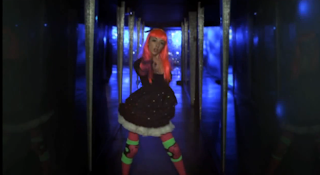 But even with her vocals being overlapped to the max, you will find that the song still sucks as much as the other remix (all 40 seconds of what we heard), and the PV is worse. Much much much worse. Lord, if I was to go to hell, this would be the video I had to watch as I make my way down there via the train. I really do hate it... 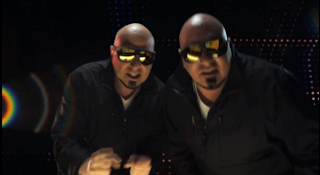 There is a shit-load of Raver-type CGI used in the video, and pretty much nothing else. We also get a heavy dose of terrible clothes, crap wigs and Lady Gaga influenced style. To say the least, the video gets boring very quickly. I actually had a Seriously face on all throughout the video, it was so damned boring and awful.
To top it all off, we get some very lack-luster dancing from Cruel herself. The dance itself is uninspiring, lazy and boring and doesn't fit the song. You would think that, being a dancer herself, she would know how to move it? Well quite obviously she doesn't, because here you can see how far her 'talent' goes. 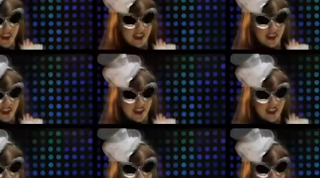 Wtf is she trying to be a bug?
To add to the horrendous dance, during the scenes with that tragic orange wig, it looks like Cruel's been practising her stripper moves. She looks like she's ready to go down on that wall and give it a half-assed good time. Well Cruel, you know where to go for a job when being a British "Idol" doesn't work out for you. 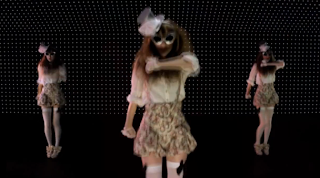 I also fear for this girls fashion sense - she stated on her facebook page that some of these clothes used in the video are her own, because the stylists liked her fashion sense. What fashion sense, may I ask? She looks like she dressed in the dark, grabbing whatever she could find. Yes, some clothes match, but not all. And those fucking wigs. I really hate the blonde wig, for the pure fact that the wig, the outfit and the make-up make her look like a drag queen, or an old woman trying to look young. 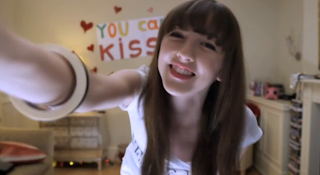 Oh, I forgot - the opening and ending are the only good points to the entire video. Just so ya know.

To simply put it: I hate the song and the video. There is so much wrong with it. From the song, the video and the bad clothing choice, Beckii Cruel has made a really shit attempt at trying to grab the British market with her song.

Overall, the video is something that I think even a club would reject - it's poorly thought out, the dance lacks and relies far too much on repetitive arm movements and the costumes are poorly matched, though some of the outfits (okay, just one) work well. The only thing that I actually like about the video is actually the CGI - some of it is pretty good, whilst other parts of it are horrible and should have been rejected upon being mentioned, however, I doubt they cared about how they would make this PV.

I'm going to say that I have to give Cruel props for promotion, though - she's using the Internet well in terms of selling the product, and it seems like she knows what she's doing. She's using iTunes, HMV (apparently) and a few other online music shops, as well as advertising herself on her youtube, the LOVERUSH UK youtube, facebook and probably a few other social networks as well. The girl is trying hard, and I respect her for that.

But the song is still shit.

Oh, and get this: There are more remixes that I've just found.

The fact that Four of these horrible mother-fuckers are coming out this year makes me cringe. Really? Only one of these remixes sounds different to the other three, and that is the Bluestone Remix. Oh, and I had better not forget that Cruel is also releasing the version that is Beckii Cruel ft The Clones. And who could forget the original?

Anyway, I think I have said enough for now, so I will leave you with this:

I have a feeling that, because of this review, a lot of you will now be hating on me, or simply cheering me on, for what I have written. But I am just writing my opinion, and you need to remember that Beckii Cruel is classed as an Idol still. She is in the media, she is on the news, meaning that no matter what, she is subject to people talking about her and criticising her. Until she gets out of the news, a lot of people will write stuff about her and say things about her that are good, bad or in between. This is my say in it all, and though I think the girl is sweet, I personally think that she isn't idol material, and that she sucks at what she's trying to make her career.

Beckii Cruel is a hard working girl who has put up with a lot, but I am a reviewer and a blogger of Idols, which means that she is subject to my criticism when I feel that I need to vent. That is all.


You Can't Kiss Me LOVERUSH UK Radio Remix:
The rest of the Previews:
And if you want to buy it... have fun xD