All opinions are my own, and I am entitled to these opinions. Don't agree with me? Then obviously that is your opinion. FREE WILL! 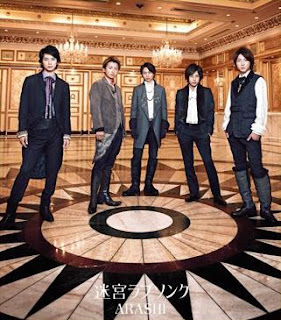 It's weird, writing about a male Jpop group on my blog. It really is, because I never intended to ever ever ever like boy groups - well, when it was suggested that I at least give them a try, maybe head over to the darkside where there's a little Ryosuke Yamada, maybe some Matsumoto Jun, and see what tickled my fancy, I took that chance and... well, here I am. The people who did this to me, feel giddy now. (Thanks Ray! Thanks Aim! Thanks Thennary! Thanks Phobos!)

And if you must know, Arashi was one of the groups which tickled my fancy. And it is their PV I have watched, and enjoyed, today~

Anyway, today Arashi came out with their newest PV to their song Meikyuu Love Song, which I had not previously heard until the video came out. I wasn't really sure what to expect from the group - I have only watched about three or four of their videos fully, and I've never really listened to their songs until my 3 day boy band challenge, so I'm very new to the group. Of course, I have seen their serious and fun side in the few videos that I have watched, and the group is very impressive, so I wondered what they would do for this video.

So, let's dive into my first full review for Arashi, and see how I squee over certain members. Mwahaha! 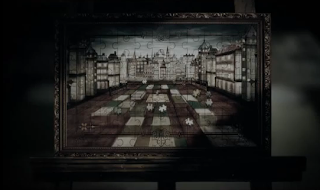 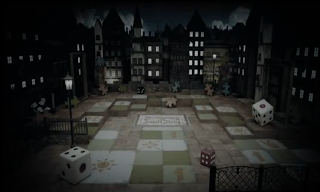 This set is seriously pretty <3 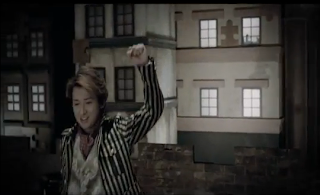 You are not my favourite D; 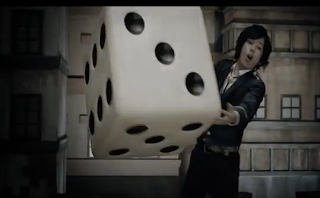 Hello handsome! Throw me, throw me! Into your arms, preferably ;D 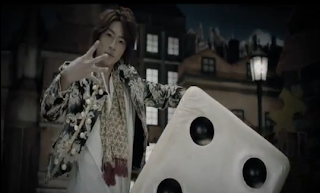 Fuck you're cute, too :O 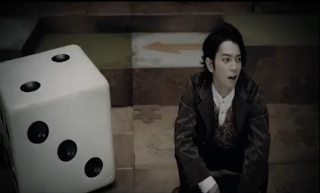 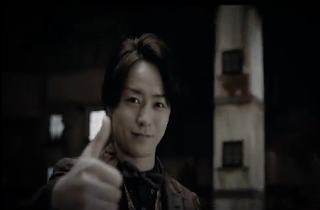 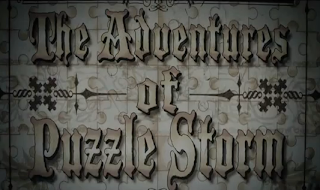 The Adventures of Puzzle Storm sounds like a really cool story that I would read, then get bored of :/ 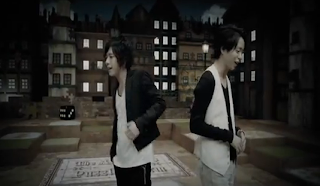 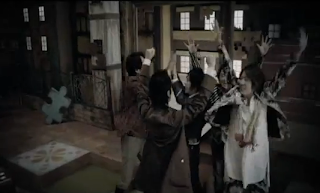 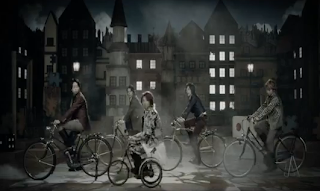 I loled at this part xD 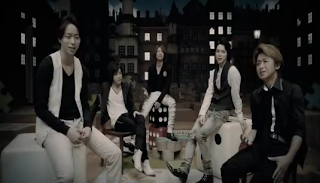 I like the sitting on the dice effect. This scene is awesome 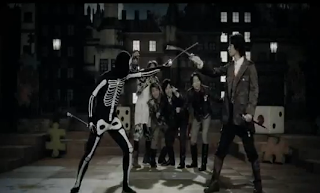 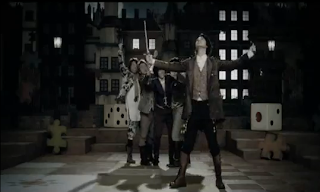 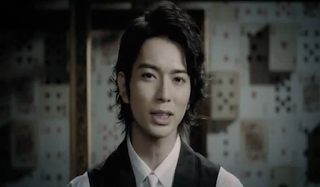 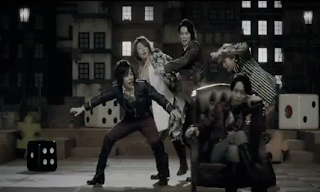 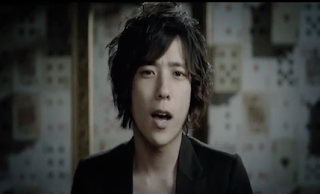 Fuck, I want you!!!!! I need a Pokéball to catch this gorgeous piece of hotness! 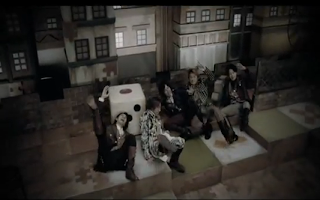 FAIL I has no Pokéballs! D; 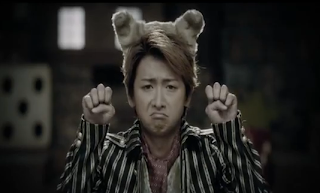 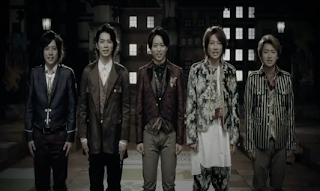 They look awkward, and I am not digging Jun's jacket. 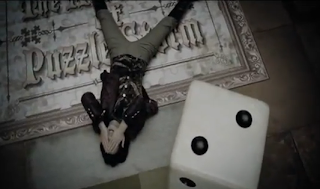 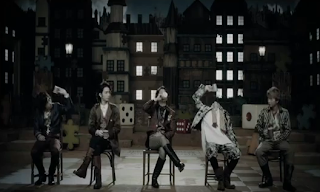 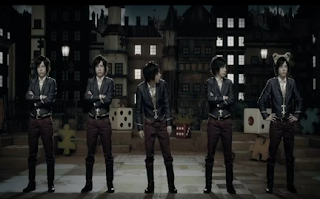 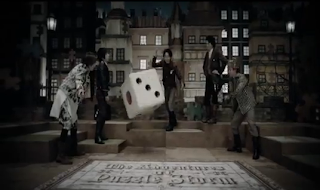 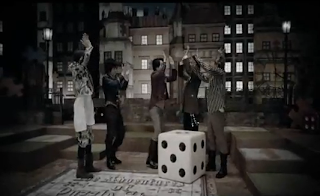 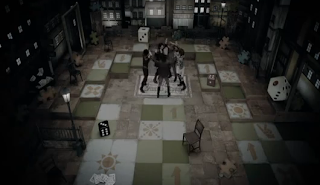 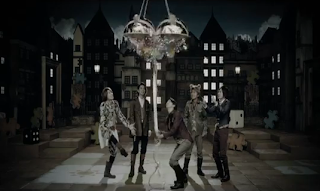 Where the hell did that come from?

Oh my gosh, it's still weird, writing for a boy group... but let's get over my silliness and get on with my conclusion of the video and the song. Yay times!~

In all honesty, I have been waiting for a PV by a boy group to come out, and when I saw on Tokyohive that Arashi were releasing a new single, I was like Yes, finally, I can start reviewing some boy band stuff and drool over Matsumoto Jun. But I had to wait... and then it came out! I am ridiculously happy with this PV right now, because it's the first PV I have truly appreciated from a Japanese boy group ever since getting off my high horse and listening to music by male groups. I never thought that would happen, honestly.

Anyway, I have really come to like Arashi - not because of this PV, but probably because of the other songs I have heard from them. They are a really good group from what I have seen, with great vocals and great presentation. Their is a lout of effort put into their songs, and they look like they mean every word they say, which makes me really like the guys and makes me eager to see what they come up with next.

Anyway, now that that is out of the way, let's get on with the actual conclusion/review for this video.

From the start of the PV, I wasn't overly keen on the darker tone it had going through it. However as I watched it more, I found that I didn't care - the members were enchanting enough, along with the cute board game storyline, to make me forget how dark the setting was and to just focus on the members and how they portrayed themselves throughout the entire video. As I watched it, I had a few giggles because of the scenes where they are on bicycles or trying to escape from invisible rope, whilst one of the members found a different way to escape and just passed the others without a care. Those parts really made me smile and made me like the group more.

I find that the video is extremely carefree and rather childish in its own way, whilst still trying to tie in a mature element with the darkness of the video and the maturity of the song. However, these elements all work together so well. The silly antics are extremely cute and charming and make you fall in love with the video. I honestly have no idea what Arashi's past videos have been like, but this video has just made me like the group even more. The shots really show the emotion that the group wants to portray, as well the carefree nature of the song and video. It is not something I expected, but I found that I really did enjoy the video - especially when mr Hawtness himself, Nino or Matsumoto Jun, pop up and grace us with their extreme yummyness.


Fangirling time over, I like the song. I wasn't so sure what I thought about it at first, other than that it was rather nice and not as poppy and upbeat as the songs that I am currently listening to. But the voices are truly mesmerising  all of them sound really wonderful and even beautiful at times. I love their solo lines, by far my most favourite parts of the entire song, and I love how they flow together as a group. I love how they sound together, but also how they sound when they aren't together, making this song a bit of a winner for me.

The feel of the song was something I anticipated - a nice, slower song, though a bit more upbeat than I thought it would be, with a relaxing tune that grabs you in when you eventually get into it, and totally captures you in the process.

I feel that the video fits the song well - with the mature sound, the darkness fits that, but with the silliness and carefree attitude thrown in there, we see a childish and wonderful side to these guys that I wouldn't have expected to see from a song like this. But, it strangely fits the style of the song.

I'm really starting to like Arashi, and this PV has just helped me to like them even more. I also love Nino, juuust saying!


Ps: Watch out! This might be taken down at some point! Dx