I missed a day out... but I was really tired, I had homework in for the next day, and I was tired.

Even now, I don't want to post, because of a really shit day at college that included some bitch taking apart something of mine and then me yelling at her. Good thing I have to go to my student Councillor tomorrow, because I need to VENT!!!!


Urgh, being conflicted by so many emotions is both tiring and stressful. I'm stressed enough, but I'll shut up now and get on with my post.

Anyway, day 3 is probably one of my favourite days, alongside Day 4, because of what the question is.

Day 03: If you were a guy who would be your girlfriend?


As I already said, this is my favourite question - because I can choose who I would date, and explain why I would date them, though I don't think I'll explain myself well. So, without further adieu... 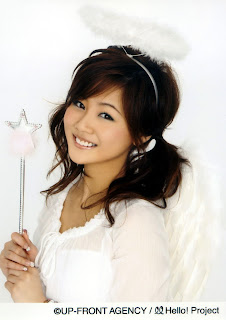 
Now, this is fully based on my personal preference, but if I was a guy then I would definitely date Niigaki Risa. Ever since I watched Morning Musume in the stage play Cinderella, I have wanted to stand next to her. I think that she is incredibly beautiful, and has the girlfriend-like qualities that I would desire. I have a feeling that, as a boy, I would be a total wreck and wouldn't know how to speak to her, however I would want to hold her hand all the time. I'd be so nervous going on a date with her, I swear.