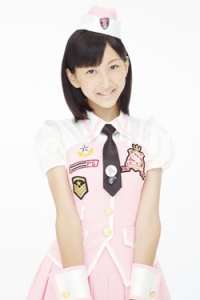 It has come to light that S/mileage Sub-Member, Kosuga Fuyuka, will be leaving S/mileage due to Severe Anemia. Apparently Fuyuka was feeling bad, and so they sent her to the hospital and found out that her condition was more than they expected, so it has been announced that Fuyuka will undertake a full recovery, and then return to Hello! Project as a Hello! Pro Egg.
When I heard this news, I was really sad about it - Fuyuka is one of my favourite sub-members, and I had a feeling that no matter what, Tsunku would keep her in - she was the centre in the pictures of the Sub-members, and I haven't seen an intelligent looking girl like Fuyuka since KonKon, so I was excited, and I wanted to see what she could offer to the Hello! Pro plate. Well, she can still do that - but as an Egg instead now.
Even though I am really sad about this, I am happy that Fuyuka is strong enough to stay on as an Egg in Hello! Project, and watch S/mileage grow. In all honesty, I hope that she auditions for S/mileage Gen 3 if they ever get to that stage, because Fuyuka is very sweet, and I want one of my new favourite Eggs to shine and to be recognised once again.
Get well soon, Fuyuka~
Further information has been provided by Tokyohive in the form of a written statement about what has happened, including something from Tsunku which shows us what he had planned for her anyway after they found about her severe anemia. Here is the post, please make sure to check out Tokyohive's post as well.
It’s only been three weeks since Kosuga Fuyuka was named as a new sub-member of S/mileage. Unfortunately, it’s been revealed that Kosuga had to withdraw from the group due to poor health.
The announcement posted on the official S/mileage website states:


“Thank you for always supporting S/mileage. Due to S/mileage sub-member Kosuga Fuyuka’s poor health being brought to our attention, she underwent a careful examination at a hospital. According to the results of the exam, it was discovered that she has a problem with her blood composition. Due to her severe anemia, she must refrain from exercise and must undergo medical treatment for several months.
It is truly unfortunate, but her activities as a S/mileage sub-member will be cancelled for now, and she will focus on her treatment regimen. After she has completes treatment and her health returns to normal, we plan to have her start again as a member of Hello! Pro Egg [Hello! Project's trainees].“

Hello! Project’s producer Tsunku♂ also commented on the announcement:
“What I was able to say to her was, ‘Please don’t over-do it, and devote yourself to your recuperation.’ When I asked her, ‘After your full recovery, you would be able to continue your lessons as a member of Hello! Pro Egg, but what would you like to do?”, she replied, ‘I want to quickly get better and start over again as an Egg.’

She’s still young, so I would like her to quickly regain her health and start again as an Egg with her wonderful smile.

The newly reborn S/mileage will go forward with the three original members and  four sub-members. Everyone, please cheer for the girls!”

Please wish Fuyuka good health for the future, everyone! Much love~