Ever since 9th Gen have come onto the scene, and with Ai graduating this month, I have really started to think about who my favourite members of Morning Musume are - with the latest singles that have been released, and personalities flaring, I have grown to love some members more than others, whilst great dislike has simply turned into dislike (but I can see why people like them). So in this post I will show you my favourite members and least favourite, in an order from the one I dislike the most to my favourite member as of right now, with some reasons to as why I like them, whether the reasons are good, or just downright weird (okay maybe I won't give reasons?). So, let's get on with the Top 9 post, pictures included! 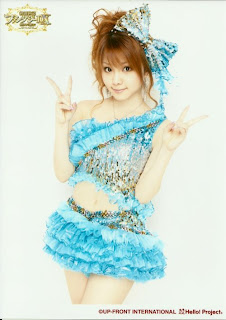 Reina Tanaka, or as I know her, The Wink-Meister! Reina has been a notorious dislike for me since the beginning of my Morning Musume fandom - and she still is! However, as of late I have really come to appreciate her - I know that she has a great voice when she isn't forcing herself to be cute (that's Sayu's turf, b*%$#!) and in certain scenes, I see a real beauty there, and I can sorta see the appeal of her - Okay, she's not incredibly sexy, and the amount of bows she can go through is kind of annoying, but other than that, she is a very pretty girl - over-used and pushed far too much, but yeah, she's appealing in her own Wonky way.
Sadly, she has only ever really charmed me in ONLY YOU - let's hope she charms me again... when she's graduating ;) 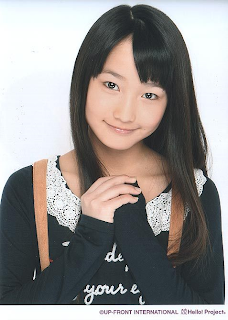 Sayashi Riho, aka Morning Musume's new 'Ace'. Now, I may just have to sit and wait for all the hate to come at me right now, like 'Why are you hatin' on a little girl, BITCH!?' - Haha, that's not it - I don't hate her, I just don't like her enough to be a favourite, much like Reina. I don't fangirl over her, but I can definitely see why people like her - she is a killer dancer so much better than that new group, Fairies, bwahahaha! and completely adorable - her vocals are pretty awesome, too, and she deserves to be the new 'Ace/Face' of Morning Musume, because lord, does it make a beautiful change from the Wonky-eyed Hag and the beautiful, but rather bland/over-rated Ai-chan. Seriously, I don't mind the girl - I like her, and I think that she deserves the front/centre spot and a whole lot more. She is talented, and really cute. I just find her face too arrogant for my own liking (kinda like Fujimoto's face) but her personality is that of a sweet and innocent 13 year old girl, which is exactly what she is.

I just personally dislike the Riho fans who go that one step further and criticise everyone else and constantly try to shove Riho into my face. Just Sayin' (and I don't mean all Riho fans - there are just some who actually go the extra mile to pick on other members and try and bitch at me for liking another member more) 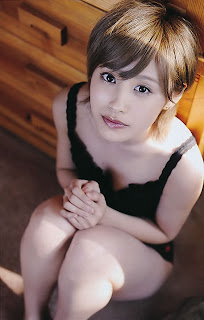 Takahashi Ai-yai-whhhhy-Ai. Aka, Aibutt. I have recently come to enjoy Takahashi as both a performer and a singer - I loved watching her in Ribbon no Kishi, but not so much Cinderella - Gaki stole that show - and I think she is a wonderful performer, but other than that, I stop caring. I see no personality from her as of yet, though her shyness and meek personality is quite cute and endearing. Now I will admit that I absolutely did not like her when I first got into Morning Musume - I detested her for the fact that she got so many god-damned lines, but I have grown up since then - and I know why she has so many lines. Her awesome voice, her beautiful features, and how well she can dance. I mean, she really wowed me in the latest single, and I have to admit, I will miss her when she finally graduates - but I am also glad, because it means that the other girls will get a chance to shine (Sorry, I'm actually kidding - Winky will get more time to shine) and also, I get to see Gaki as Gaki - not as that other 5th Gen girl - I get to see Gaki as a freakin' LEADER! I've wanted this since I fell in love with her...


ADIOS, AI! This post involves too much Gaki - but guess what? I don't care ;D 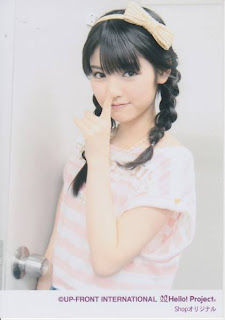 Michishige Sayumi, the rather enticing beauty who we know as Sayu. Sayumi was one of my instant Morning Musume favourites when I first became a fan, probably because she was just as wonderfully cute as Koharu, but has recently become less of a favourite since certain members joined the MoMusu party. I simply love Sayumi - her narcissistic character is just absolute love, and though her singing isn't the best, I like her voice. I find her funny when I watch TV shows, and it's great when she fangirls over other Idols - it's like meeting another Wota, albeit a rather unreachable wota at this point in time. I also find her to be extremely beautiful - especially in the recent videos. I don't consider Sayumi to be cute now - she has pretty much graduated from that theme and turned into an adult now. So she should the cute act, and just start swaggering about the studios, telling everyone about her ultimate beauty and bitch slapping those who oppose her. 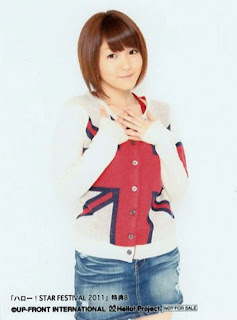 Mitsui Aika, also known as The Rack of MoMusu or by her non-fans, Granny/Shark Face. I have been a fan of Aika for some time now, however I do find that she can go up or down on my list, depending on who is my favourite, however I have never disliked her so greatly that she's been behind Winky. Now, if you're wondering just why I like this girl, I will tell you - I like the Under Dogs. Hence why I was a big fan of Mogi when she auditioned for Morning Musume. But I also find that Aika is extremely cute, and when she's not putting the fake cuteness on, she has a nice voice to listen to, but... she's just put in the back too much. This may be her own fault, or she just isn't popular enough, but I do know that those who are her fans are there until she graduates. She seems like a sweet girl, and a good leader/senpai-figure as well, and I admire her for how harsh she was with the 9th Gen, though she can get scary there, too...

Whatever, I like Aika quite a lot - she has this cuteness about her which I can't shake off - Love you, Aika ;D 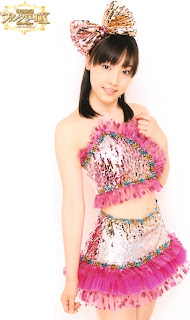 Fukumura Mizuki, or FukuHime/PonPon/Freakin' GORGEOUS. I could actually say that this is a tie between Fukumura and my 3rd favourite member, because I like them about the same. Fukumura was someone who was initially my 3rd favourite 9th Gen member and behind my Aika fandom, but recently I have found myself falling in love with her. FukuHime is just gorgeous - she has a kickin' body (yeah, breakin' out the dated phrases) and a just-as-kickin' voice, and a beautiful face to go with it. If you haven't heard her Hare Ame Nochi Suki cover, go listen to it - you will not be disappointed. I actually wonder why I didn't like her as much before - maybe it's cos I didn't see her personality, but I know for sure that she is a sweet girl who loves MoMusu with all her heart, and that she is a friendly girl, considering that she gets along with all the members. Oh, and I like how hot she is, though I'm super pissed at the fact that she's in so few shots for the PV's right now >.> Tsunku, you're a dick, you know that? 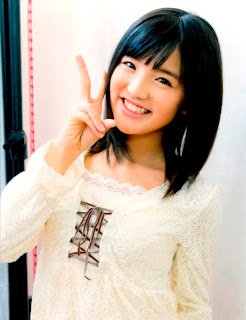 Suzuki Kanon, also known as 'That one with the Afro Wig' or Zukki-chan. Now this was bloody hard to choose my 3rd favourite, because I could put Zukki 2nd, esily, but right now I am still fangirling over Numero 2 a lot - however, Zukki was my first favourite 9th Gen member when they were announced. I actually did not like her during the auditions until I actually watched the video and saw her cute acting style - she is a really cute kid, and makes me laugh a lot, which is a good thing. I adore this girl, and yeah, I wish that she was more popular - but she isn't (Kurai Kurai, don't Kurai, Fuu~), so I will just wish for it. Other than her cuteness and LOL factor, she has an awesomely powerful and deep voice and an extremely overpowering smile. If electricity ran on smiles, Zukki would be the girl to call.
Oh, and her bug impressions - seriously, she 's the cutest kid! XD
Nuuuuuuumber 2!? 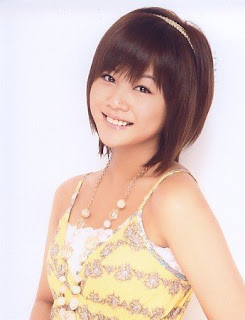 Niigaki Risa, aka, Prince Gaki, Ai's Lover or Eyebrow Girl. I love Gaki. I love her so much, I actually want to change my dating preferences and marry her. Ever since I watched Morning Musume's stage play of Cinderella, I really took notice of her and fell, because she is jut that damned awesome! Maybe not the most popular Morning Musume member, I actually think highly of Gaki - she is a strong singer and dancer, beautiful, a good actress (from what I remember - I need to watch that bloody horror movie she's in) and loves Morning Musume soooo damned much. If I had to admire any member, it would be Gaki, because of how much she cherishes Morning Musume.
She's going to make a killer leader, because as far as I know, she does far more as a sub leader than Takahashi did as a leader. Jus' Saying :/
And Finally, here we go! Number 1!!! 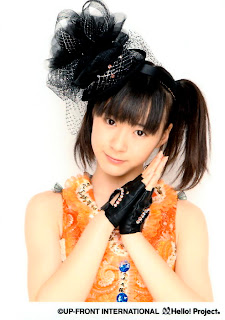 Ikuta Erina, or as her fans know her, Eripon, or as I nickname her, Ikupon. Ikupon is the second olders Gen 9 member, and my absolute favourite out of all the current Morning Musume lineup. I never thought I would like her this much, actually. I liked her during the auditions, even commenting that she had the butt of a Morning Musume girl when I first saw her dancing - and she still does... I feel like a perv >.> Meh Though she doesn't have the best vocals of Morning Musume, she still has a great Idol-like aura that really draws you in - from how awkward she was to how much of a personality she is now, she just draws you in, and she has created a pretty good fanbase from the beginning till now. I adore this girl, and how she lured me into her net of fandom - Ikupon, please let me keep on loving you~
I have also been enjoying the amount of camera time she has been getting lately - have the H!P staff realised how beautiful she is? Yes? Good!
I am kinda hyped now... Have a good night, fellow Wota's! Who are your favourite members?
I have a poll now! YAAAY! And no, you read POLL not Pole o______o
Chiima~
PS the title changed haha - because IntlWota pointed something good out ;D so I changed it to 'current' and 'for now'... cos yeeeeah >.> Who knows how quickly this will change? :P
Posted by Chiima at 21:45