Kono Chikyuu no Heiwa wo Honki de Negatterun da yo! - It Caused a Ruckus :/

As always all opinions are my own. If you get offended then simply leave. Got it? See ya~ If not, then yay! Stay for some tea and a ramble of sorts... or maybe an angry rant, whichever comes first :3
Okay so there has been some form of a ruckus over on Tokyohive, a site that dedicates itself to bringing Japanese news to those who care about it the most. Anyway, the reason for the ruckus was actually the release of the clear, FULL Radio Rip os Morning Musume's 47th Single track, Kono Chikyuu no Heiwa wo Honki de Negatterun da yo!
If you still haven't heard the apparently 'offending song' then please go ahead and listen:
So, why is everyone making a fuss over this song? Is it really that bad?
Or is it because of the line distribution, something to do with Ai-chan's graduation... well, kind of those two, actually :/
OKAY so some people don't actually like the song, whilst others absolutely love it... then there are some who go further (okay let's NOT refer to my ONLY YOU post on line distribution here xD) and bash either the line distribution (totally understandable) OR Ai-chan.
And taking it out on Ai-chan is one step further... >.>
I may have to cap a few things to REALLY show you what has been going down...
You may need to expand the boxes, so just click 'em!

This one is kinda harsh about it - actually, he/she is horrible! They called Takahashi a BITCH!
Dude, I have had my stupid share of dislike towards a member, but I have never gone as far as to call any of them (Okay, maybe Mikitty, but that's cos others said it!) a bitch! Dude, Takahashi is probably the sweetest Musume member next to Aika! There is nooo way she is a bitch! 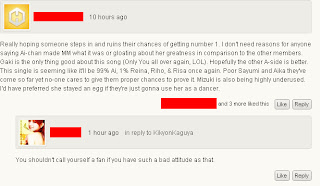 I didn't like this post cos they said that the MoMosu girls don't deserve Number 1 spot - er what? They deserve it as much as anyone!
Especially as Ai-chan is leaving! I think it would be GREAT if her last ever single with MoMosu hits #1 on the Oricons! I would be super happy about it, and I am sure she would, too <3 So let's hope she DOES get it! 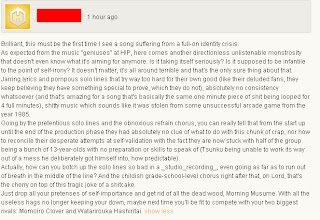 Now THIS post is rather horrible. This person obviously dislikes all things Hello Pro and trolls around Tokyohive waiting for updates to give it negativity. This is just a terrible post, there is no pros or cons! Urgh... >.>
Oh! But we have positivity on the line, too! So yeah, I'll feed you some~ Take away the hatred towards Ai and MoMosu|~

Even though this person isn't too keen on the song right now, they have the right mind set about the single. Thank goodness!

THIS GUY MAKES SENSE! Yes, yes, I disliked Riho, but I'm actually 'meh' with her now more than anything. I don't hate on her, never did, it's her really horrible fans (the ones who bash Mizuki and others etc) I don't really like. Anywhoo, this dude makes absolute sense.
OKAY so what have we learned?
Haters troll and hate >.>

Also, this is Ai-chan's LAST SINGLE people! She's GONNA line whore! Okay, I am MEGA MEGA pissed that Koharu didn't get this treatment when she graduated, heck, she was the 'Miracle' of the group apparently! BUT STILL! Ai-chan has been the leader of Morning Musume for so long now, she is the mosrt popular member and their front girl next to Winky! She is gonna get the cavier on the silver spoon treatment! So guess what?
Yeah. Get over it!

OH another thing that bugs me about the comments on Tokyohive that concern this song.
Why is everyone bitchin' about their outfits being 'similar' to AKB's? They're not even similar! Just the colour!
Dude, MoMosu started off the Gold outfits with The PEACE and then they used them in Onna ni Sachi Are - obviously they're overdue for another Gold outfit listing, and why not Ai's last ever single with this great group?
Urgh, whatever, petty AKBers fighting over stupid outfits is stupid... I'm done with that >.>

OH and more comments that pissed me off: Someone said that Aika/Sayu/Kanon/Fuku/Eripon fans shouldn't buy this single cos we can't hear them.
WTF no way - I'm buying this single cos I LOVE THESE GIRLS - They all worked fucking hard to sing this song and to make it awesome! They did their best and they made it the way it is - whether there are solos for one or two, it doesn't matter. I know that the other girls are in it and I know that they love their jobs, so yeah, I'm buying the single, even if it is just to drool over the cover... No it isn't. I like the song A LOT.
All I have to say is that these guys who think that the single shouldn't hit numero 1 or hate Ai-chan or all of H!P should get a fucking life.
All groups are great, all of them have their fanbases - and all of them have their haters. Sadly, some take it a step too far.
That's my piece of cake for the day. 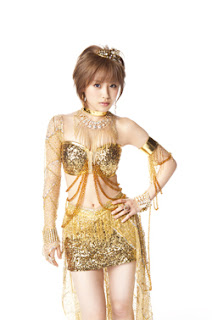